FOXBORO, MA – Keion Crossen says his mother cried, but his dad was a little more reserved.

A seventh-round draft pick out of Western Carolina, and considered a long shot to make the roster of the five-time Super Bowl champion New England Patriots, the former Northampton High School star and Garysburg native waited more than 12 hours to call his parents, Winnie and Thomas, and break the news that he survived the final cut. He told a Massachusetts media outlet his mom cried, his dad a little less so. 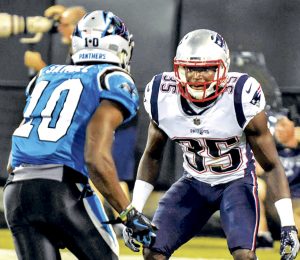 Garysburg native and former Northampton High player Keion Crossen (#35) made the 53-man roster of the New England Patriots after surviving the final cut down. He makes his NFL debut Sunday against the Houston Texans. Photo by Angie Todd

“He played a little hardball,” Crossen recalls. “But they’re happy. They’re definitely happy. They did not know. They enjoyed that I get to enjoy my dream. They just hoped the best for me.”

No one, especially Crossen, was happy after he turned in what he called the worst defensive back performance of the Patriots preseason. The game film showed two pass interference penalties and defensive holding around an allowed 24-yard completion against the Eagles. The raw nature of his game had greatly overshadowed the rare athleticism he brought to the position and his days as a Patriot appeared numbered.

Spending a restless night back at his apartment, Crossen jumped into his film study, wasting no time trying to hasten the arrival of the future he believed was still attainable.

“[I’m] very hard on myself, and I expect perfection,” he continued in recounting his ‘nightmare game’. “That night kind of tore me up a little bit, but I did go through that game film again and see what I could’ve done better. And obviously I tried to improve that. That night, it was an eye-opening night for me.”

Two games, three pass break-ups, and no phone calls to come turn in his playbook later, Crossen’s efforts were rewarded. He’d made the team.

His rebound from the on-field horror of Aug. 16 to a silent Sept. 1 with no word from the front office was as stunning as it was quick.

The significance of his bounce-back performance against the Pats’ next two preseason opponents, and in the practices in between, cannot be understated. First against the Carolina Panthers where he deflected two passes and allowed one catch for 31 yards, and then he ended up deflecting another pass in the preseason finale against the New York Giants.

Most seventh-round picks are tossed out of the NFL this time of year, more likely to occur than an errant Tom Brady pass….yet here was Crossen, sticking like Super-Glu.

But from the final whistle Thursday night to the cutdown deadline on Saturday, Crossen experienced the most anxious time of his football life.

All day Saturday, Crossen stared at his cell phone. He estimates he looked at it every second.

“It didn’t ring, so that was a good sign,” Crossen said.

The same went for Twitter. He refreshed and refreshed waiting to see if someone else knew about his future. Finally, the clock hit 4:01 p.m.

The moment the rookie realized he’d made the initial roster, though, hardly stuck. Crossen said he enjoyed himself through all of 60 seconds. One minute past the deadline, his focused turned.

The Patriots host the Texans in the 2018 season opener for both clubs on Sunday, Sept. 9. Kick-off is set for 1 p.m. at Gillette Stadium in Foxboro and will broadcast on CBS.

Without a doubt, there will be hundreds of local eyes tuned in for that game….each glued on #35 for the Patriots.

PLEASANT HILL – A lone suspect is sought in the robbery of a gas station near here early Saturday morning.... read more