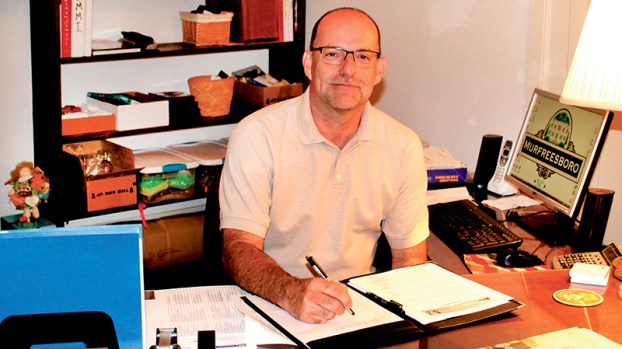 Daryl Williams, who spent 30 years working in different roles for the North Carolina Department of Corrections, has been hired as the Executive Director of the Murfreesboro Chamber of Commerce. Staff Photo by Holly Taylor

MURFREESBORO – With a career of public service behind him, Daryl Williams is changing his focus to the private sector.

The retired Department of Corrections employee, who ended a 30-year career at the rank of Captain, has been named as the Executive Director of the Murfreesboro Chamber of Commerce.

The Hyde County native, who has resided in Northampton County since 1986, began his new duties on Aug. 16.

“I’m very excited to begin this new chapter in my life,” said Williams. “At the same time I’m very humbled by the opportunity given to me by the Murfreesboro Chamber’s board of directors to help guide this organization.”

Williams said he became aware of the open Executive Director’s position by reading a story about it in the Roanoke-Chowan News-Herald.

“I thought to myself at that time if I decided to go back to work after retiring from the state that this was a job I was interested in having,” he shared.

To completely understand the role of a Chamber of Commerce Executive Director, Williams said he turned to someone with ample experience.

“I met with Judy Collier, who is the Executive Director of the Northampton County Chamber of Commerce, and had an in-depth conversation with her about her duties and responsibilities,” he said. “The information and advice she passed along to me made me even more interested in applying for the opening in Murfreesboro.”

That application was sent in three months ago. In June, Williams was summoned for an interview with the chamber’s board.

“They took their time, and wisely so, studying all the applicants,” Williams said. “I was contacted earlier this month that the job was mine and I met with the board on Aug. 13. Three days later I went to my new office and began getting things in order.”

Williams was told up-front that the position is part-time.

“That’s fine with me,” he said, “I wasn’t looking for another full-time job,” he smiled.

For now, Williams will be in the Chamber office (located inside the historic Roberts-Vaughan House on Main Street) all day on Monday. He’s looking to work in other office hours as needed.

“I envision opening at 7 a.m. on Mondays and closing at 6 p.m.,” Williams suggested. “Most businesses in the Murfreesboro area are open from 8 or 8:30 a.m. until 5 p.m. If you’re a business owner and in your shop all day, then when do you have time to meet with me? By opening early and staying here in the office later, that gives these business owners the opportunity to come see me and we can bounce around some ideas, discuss promotional strategies, at a time that’s more convenient to them.”

As for the remainder of the week, Williams said he will use that time to make “business calls….meeting face-to-face with our business owners at their shops.”

“I’m looking forward to working with the business community here in Murfreesboro and in Hertford County and beyond,” Williams remarked. “There are some things I see that have worked well for the chamber here in the past. I want to build on that foundation and move this chamber forward, which in turn serves as a promotional tool for the town, the county, and the region.

“I’m also looking forward to working with the chamber’s board….they’ve got a hard-working group here who all have the town’s and the area’s best interests at heart,” he added.

While his DOC career with the state isn’t exactly aligned with the private business sector, Williams said he can use the experience he gained from his position as a Career Readiness Coach to help with the job transition.

“That (state) job was all about networking with other entities, public and private; networking is a vital part of operating a chamber of commerce,” he observed. “I feel the transition between these different jobs will be smoother because I’m already accustomed with promotion and marketing.

“I know I work at the pleasure of the chamber’s board of directors, but I also work for the chamber’s members,” Williams added. “Our business owners and their employees are the life blood of our local community. The chamber’s job, our goal, is to ensure their doors remain open, and you do that by promoting them and working with them to develop their business.”

Also listed high on his “to-do” list is keeping the chamber’s website updated and to work closely with local newspapers and radio stations.

“Newspapers and radio stations are a constant for local communities, especially those without a TV station within their market,” Williams stressed. “I read your paper (RC News-Herald) three times a week to keep abreast of local news and I listen to local radio stations.”

Williams retired March 1 from the North Carolina Department of Corrections where he worked at Caledonia Prison and Odom Prison before spending the final three years of his career as the Career Readiness Coach at Bertie Correctional Institution in Windsor, a job where he recruited and help train the next generation of correctional officers.

He and his wife, Kandy, reside in the Faisons Old Tavern community, located between Conway and Jackson. They are the parents of two daughters – Taylor, 21, a recent graduate of Martin Community College and currently engaged to be married; and Harley, 19, a sophomore Business Finance major at Chowan University.

To learn more about the Murfreesboro Chamber of Commerce, stop by their office at 116 East Main Street or call 252-398-4886.

Hope is on the other end of the line

GATESVILLE – The mission of Albemarle Hopeline is about as clear as it gets…. a private, non-profit organization providing comprehensive... read more