At issue is finding common ground regarding resident’s complaints over water bills.

During the Aug. 14 Town Council meeting, David Robinson, pastor of Empowerment Temple, located at 970 Academy Street, addressed the group during the public comment period stating that he’d received a water bill from the Town for $1,015.20 – and that amount was a 90 percent credit for an original bill of over $10,000 that was adjusted by Town Manager Kerry McDuffie.

Robinson says he refused to pay the thousand-dollar water bill, and instead hired a plumber to determine if there was a possible water leak. With the plumber finding none, and still refusing to pay, the church’s water was turned off; but during the cutoff visit it was discovered there was a leak in the pipeline running from the street, and confirmed by the plumber during a return visit. 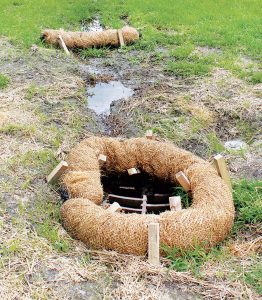 A leak that revealed a water-main break leading to a bill of $15,000 here at the Empowerment Temple on S. Academy Street in Ahoskie has sparked discussion among the Town Council on future adjustments of customer water bills. | Staff Photo by Gene Motley

“He found (the pipeline) had been (jerry)rigged,” Robinson said. “Bricks were (apparently) holding the pipe up, and at that particular place, every time there’s an excessive amount of rain, it washes the bricks out and the break (in the waterline) appears again.”

The pastor claimed the break was out of his control, and had asked the town if there was anything to be done. He says he was told whoever leased the water meter needed to be determined. However, before finishing his remarks, his comments before Council overran the allotted time limit and Mayor Jimmie Rowe told Robinson to submit his information in writing to be reviewed.

“Mr. McDuffie was doing (the town’s) policy of reducing the water bill by 90 percent; but it needs to be looked at further to see if it was on our side or your side of the meter,” Robinson said.

Robinson indicated that at the town’s request, the Department of Transportation came and observed the situation. While DOT determined it was not their fault, they did agree to repair the pipeline.

“They did an excellent job of fixing the area and helping us out,” Robinson remarked. “Doing what the town wouldn’t do.”

A back-and-forth dialogue continued with Robinson finally declaring he had now received a water bill totaling $5,000, but he did agree to submit his findings to the Town for their review.

At the meeting on Aug. 21, Councilman Charles Reynolds said he had visited the site and believed – as did Rowe who’d also inspected the area – the location of the leak was on state property (NC 42); that the damage did not begin as a water-line break; and concluded that detection might’ve been compromised due to the proximity of the storm drain.

“When we first went out in June, we noticed just an excessive amount of water use and we put a tag on the door,” said McDuffie.

The Town Manager said after getting no response to the first notice, a second excessive use notice went out at the middle of the month.

“We found the break at the end of the month, and that’s when we went out and turned (the water) completely off,” McDuffie recounted.

“This is not a problem he created,” argued Reynolds. “No one was there to retrieve the notices. If you don’t know, how’re you going to do anything about it.”

Council was told that while high volume usage is noted daily, and for some businesses it’s noted hourly, notices of excess use are generated twice monthly.

Rowe suggested to his fellow Council members that if high volume use is noticed at a residence after a period of two or three days and no action is taken, then there should be a cutoff.

“There’s no need of them having to pay for that water (usage) even though they don’t realize what’s going on,” Rowe surmised.

The mayor recounted one of the instances that initiated requests before Council for bill relief was the case of a resident who was away for an extended period of time in 2017, unaware they had a leak, thus producing a high water bill.

“If we’d cut (their) water off, they’d have come in and we’d have told them it was cut off due to excessive use and that there was a leak,” Rowe added. “Then they could have hired somebody to fix it. A leak is more than a drip, drip, drip, a leak is a lot of water.”

One Council member asked what relief Robinson was seeking, and Reynolds said the pastor should pay his regular monthly water bill based on history of usage.

“He didn’t create the problem,” Reynolds persisted. “We are possibly responsible because we should have cut (the water) off earlier.”

Rowe said it was unwise to change the policy every time a resident appeared before Council seeking relief. He felt the complaint should be handled at City Hall, not during Council meetings.

“We’ve got to treat everybody the same,” said Councilwoman Jamie Burns. “Let’s have one policy, or no policy.”

“If excess (usage) is showing, the first thing sent out is a five-day notice saying there is a problem,” Freeman said. “A second notice goes out in five days and involves someone checking because we have not heard; third, we cut you off.”

Freeman said when the customer then comes in, an average of three months usage is then applied because of non-contact over the three-month period.

When the contract shifted back to Robinson’s bill, McDuffie said a 90 percent adjustment had been applied, leaving an amount of $1,620; and that the town was seeking some payment as a show of good faith. Prior to the leak, the church’s bill had been roughly $100 a month, and Freeman suggested that amount be paid by the customer to the town.

Some Council members questioned what was set policy, and the mayor reminded the group there was a set policy: if there’s a dispute, a payment of 10 percent is still requested from customers to avoid interruption of service.

Town Attorney Buddy Jones asked Council to bring in their ideas and come back with a more refined policy that was uniform.

Reynolds suggested Robinson make his normal payment until the situation was resolved.

Several dates were bandied about for the delivery of water bills following meter readings. McDuffie says he would prefer multiple billing cycles, but realized what that would cost; he said he’d also like the shortest amount of time to be between the water-meter reading and a cutoff for non-payment. While he had no accurate calculation, he did predict a savings to the town over a three-month period of several thousand dollars, compared to current utilities loss of $6,000 a year.

“That would make a huge difference,” he said.

McDuffie added that a preliminary review by the town’s auditors said currently Ahoskie is currently owed $658,000 in unpaid utilities over a 10-year period.

“That really should be adjusted annually, because you’re not going to collect that amount,” he said.

“Let’s stay with our system for a couple of months because it’s still new and see how it works so we can answer the people’s questions, and reach an understanding,” suggested Freeman. “We just can’t continue to have unpaid (utility) bills.”

Reynolds asked what the judgment would be for Robinson and Council agreed upon two months payment of what had been the regular water bill ($100.07/month), plus a $65 late penalty, for a total of $265.14. A motion was made on this recommendation and Council unanimously approved.

“Afterward, we’ll implement the new policy for (utility) adjustments and then get back in touch over what the new adjustment will be,” McDuffie said.