He came to be the middle child of Shelton & Marie Hoggard Jones on Nov. 15, 1963. Ray did construction & painting, many times working on the road to provide for his family. Ray was a simple man and longed to live in the days of Ms. Kitty, Matt Dillon, Festus & Doc. This is understandable as he had watched every episode of Gunsmoke at least 2 times. He loved Duke’s mayonnaise, Beanie Weanies, Nekos wafers, tinkering on vehicles, working, and the Lord; not necessarily in that order. As the Lord promised, he did receive his healing.

Ray is survived by his faithful and devoted parents, Shelton & Marie Hoggard Jones of Woodland. He was as devoted and loving to them as they were to him, especially the last three years of his life. Many times, the three of them rode to doctor’s appointments together. They truly gave of themselves to help take care of him.

He is survived by his loving and caring wife Marie Dail Jones, formally of Edenton, NC. He brought to her love, laughs, care, stability, and understanding. She knew the night she met him that she would marry him. He realized it a year later (his words exactly).

He had two sons, Brandon and Josh Jones of Woodland. Ray worked hard to provide for them and their families all his life. He was devoted to his sons and did everything he could to help them in life. Brandon brought much 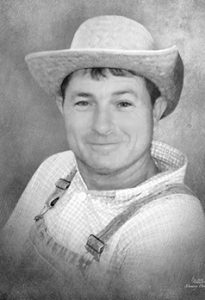 happiness to Ray, especially after he made Ray a granddaddy with his children, Dalton and Gracie Jones. Josh also brought happiness and love with his children Emma Rose Jones and Eden and Aiden Milani. His grandchildren were the apple of his eye. They have memories of him swinging them in the yard in Conway, riding on his back down the hallway or listing to the stories he would tell. When they were young, they would believe anything he would say. It was at a later age they realized he didn’t really have a girlfriend named Laquisha.

As the younger brother of Deborah, he looked up to her and loved her so much. So much so that he would often mimic her laugh by slapping one leg, kicking the other, and clapping his hands. As his only sister, he could share anything with her. Her husband Teddy was faithful in taking care of Ray during his illness.

Ray worked many years with his brother David Earl. When you saw one, you saw the other. Many times, they were mistaken for each other but that’s because of their stunning blue eyes. Ray was very thankful that David’s friend Jamie assisted in taking care of him while he was sick.

Ray is also survived by three nephews, Brian Jenkins and wife Becca, David Allen Jones, and Quinton Jones; by a niece, Melissa Jenkins; by his in-laws, Earl & Arleen Dail of Rocky Hock, NC; and a grandmother-in-law, Florence Mosley of Elizabeth City NC. Ray was also loved by his many aunts, uncles, and cousins and was so thankful for all their support the past three years.

The family wishes to express gratitude to Sentara Norfolk Hospital, Virginia Oncology Associates, Dr. Paul Conkling, and P. A. Kathy Sharpe. Also, many thanks to Community Health and Hospice.

Garrett-Sykes Funeral Service is handling the arrangements for the Jones family and online condolences may be directed to the family by visiting www.garrettsykesfs.com.