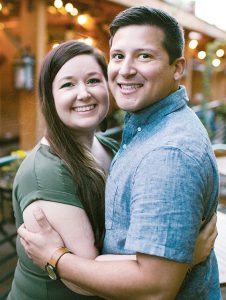 Ms. Gail Harmon Jones of Aulander, NC is pleased to announce the engagement of her daughter, Jessica Lyn Jones, to Brandon Michael Miranda, son of Mr. Robert Miranda of Upland, CA and Ms. Debora Miranda of Fontana, CA. Jessica is also the daughter of the late Elton Bruce Jones of Aulander. She is the granddaughter of Ruby Crisp Harmon of Aulander, the late James Milton Harmon of Aulander, and the late William and Jane Jones of Pocomoke City, MD. Brandon is the grandson of the late Jaqueline Hudson of Temecula, CA and the late Carlos and Raquel Miranda of Azusa, CA. Ms. Jones graduated from The University of North Carolina at Chapel Hill with a bachelor’s degree in International Studies and Spanish. She also has a Masters Degree from American University in International Relations and is currently employed as the Project and Administration Manager for ATHENA International based out of La Grange, IL. Mr. Miranda has served in the United States Army for six years as a paratrooper, where he was stationed in the 173rd Airborne Brigade at Caserma Ederle, Italy and the 82nd Airborne Division at Fort Bragg, NC. He is currently serving in the NC Army National Guard as a paralegal. At this time he is enrolled as a student at Durham Technical Community College in Durham, NC. The couple plans to be married in Durham at The Cookery on November 11, 2018.