AHOSKIE – Rev. C. David Stackhouse took his seat at the end of the Ahoskie Town Council bench for the last official time Wednesday at the Ahoskie Fire Department, and he was hoping to avoid an emotional farewell. The group was holding a special meeting on organizational matters, as well as to bid farewell to the two-term member who had spent the last two years as Mayor Pro Tem.

“It’s been quite a whirlwind,” he noted with an air of melancholy. “I never knew I had affected so many; and I’ve received many well-wishes. But I must say I enjoy doing what I do.”

The pastor arrived having held his last mid-week Bible Study, after holding his final Sunday Service on Aug. 26 at New Ahoskie Baptist Church, where he was shepherd of their congregation for more than 10 years. 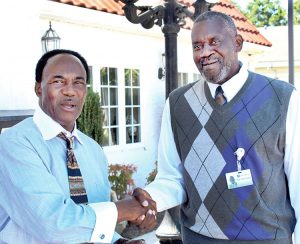 He is leaving New Ahoskie, along with his Council post, to take a pastoral position at Lewis Chapel Missionary Baptist Church in Hoke County, near his birthplace of Fayetteville. His son, Christopher Stackhouse, is the pastor there now and the elder Stackhouse will join his son, but in a different church under the umbrella of New Bethel as site-pastor of Lewis Chapel-West in the small community of Raeford.Earlier this week he held his final session as a facilitator at Hertford County STEM High School, ending by sharing a luncheon with the students.

“There was such an outpouring of love,” he recalled. “The principal called me and I came and spoke. The feeling was truly emotional and overwhelming.”

Mayor Jimmie Rowe broke up the somber moment with a little light humor.

“How’re you going to replace THAT guy,” he joked, as a ripple of laughter permeated the Council room.

After more well-wishes and banter, Stackhouse said he was uncertain about the succession process, but was recommending someone to fill out his unexpired term which runs out in 2020.

“I do have a recommendation,” he began, “and he’s someone who has lived in Ahoskie all his life, and is a pastor at St. John.”

Sharpe has been employed for more than 40 years at ACE Hardware at its two locations in Hertford County, and where he worked his way to a managerial post. Though he retired from a full-time position late in 2017, he still works at the Murfreesboro store several days a week.

Sharpe, who resides in Ahoskie’s Ward-B, graduated from R.L. Vann High School and is married to the former Trinette Vaughan. An ordained minister since 1998, he was pastor of St. Luke Missionary Baptist Church in Windsor for 10 years before moving closer to home to minister at St. John Second Baptist Church. A father of six children with 24 grandchildren and one great-grandchild, Sharpe is also Moderator of the West Roanoke Missionary Baptist Association and a chaplain at Vidant Roanoke Chowan Hospital in Ahoskie.

Town Attorney Buddy Jones said at the upcoming regular-scheduled Sept. 11 Town Council meeting; the full Council may select someone as Stackhouse’s replacement. The group would listen to all recommendations and then vote as one body on the surrogate.

Rowe said there was hope the selection would be someone with the same qualifications as Stackhouse.

“I appreciated working with you, and you working with me, because I was new at this, too,” Rowe stated, before dropping more humor. “Now we’re losing our ‘oldest’ Council member.”

“I’m appreciative of you, and I appreciate what you’ve done for young people,” said the newest Council member, Jamie Burns. “I’m also glad we could be getting another preacher.”

Stackhouse said he would be making several more trips to the area but was happy to end his tenure on a positive note.

Following adjournment, the Council feted Stackhouse with a farewell luncheon.

MURFREESBORO – With a career of public service behind him, Daryl Williams is changing his focus to the private sector.... read more