ROTA, Spain – A 2008 Bertie High School graduate and Windsor native is serving our country in the Navy, living on the coast of Spain, and participating in a critical NATO ballistic missile defense (BMD) mission while assigned to the guided-missile destroyer USS Carney.

Petty Officer 2nd Class Akeem Williams is a damage controlman aboard one of the four advanced warships forward-deployed to Rota, Spain, a small village on the country’s southwest coast 65 miles south of the city of Seville.

Williams credits success in the Navy with lessons learned growing up in Windsor.

“Growing up in my hometown has taught me to have a hard work ethic that I’ve carried into my Navy career,” said Williams. 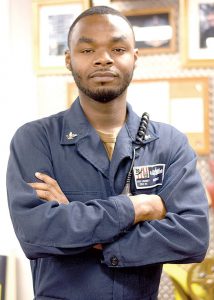 These four destroyers are forward-deployed in Rota to fulfill the United States’ phased commitment to NATO BMD while also carrying out a wide range of missions to support the security of Europe.

According to the NATO website, many countries have, or are trying to develop ballistic missiles. The ability to acquire these capabilities does not necessarily mean there is an immediate intent to attack NATO, but that the alliance has a responsibility to take any possible threat into account as part of its core task of collective defense.

U.S. Navy Aegis ballistic missile defense provides scalability, flexibility and mobility. These systems are equally beneficial to U.S. assets, allies and regional partners in all areas of the world. Positioning four ballistic missile defense ships in Spain provides an umbrella of protection to forward-deployed forces, friends and allies while contributing to a broader defense of the United States.

Destroyers are deployed globally and can operate independently or as part of carrier strike groups, surface action groups or amphibious readiness groups. Their presence helps the Navy control the sea. Sea control is the necessity for everything the Navy does. The Navy cannot project power, secure the commons, deter aggression, or assure allies without the ability to control the seas when and where desired.

The ship is named after Adm. Robert Bostwick Carney, who served as Chief of Naval Operations during the Eisenhower administration.

“We have an outstanding team here and I am honored to lead one of the finest, most capable crews in the U.S. Navy,” said Cmdr. Tyson Young, commanding officer of USS Carney. “Their continued efforts keep us as an integral part of U.S. 6th Fleet’s presence in the region.”

Serving in the Navy is a continuing tradition of military service for Williams, who has military ties with family members who have previously served. Williams is honored to carry on that family tradition.

“My father was in the Army,” said Williams. “However, my mother was my biggest influence to join. It was because of her I pursued a career in the military to better my life and pursue something greater than myself.”

While serving in the Navy may present many challenges, Williams has found many great rewards.

Unique experiences build strong fellowship among the crew of more than 300 women and men aboard Carney. Their hard work and professionalism are a testament to the namesake’s dedication and the ship’s motto, “Resolute, Committed, Successful.” The crew is motivated, and can quickly adapt to changing conditions, according to Navy officials. It is a busy life of specialized work, watches and drills. Serving aboard a guided-missile destroyer instills accountability and toughness and fosters initiative and integrity.

As a member of one of the U.S. Navy’s most relied upon assets, Williams and other Carney sailors know they are a part of a legacy that will last beyond their lifetimes providing the Navy the nation needs.

“I have definitely learned attention to detail. The Navy preaches this on a daily basis, which is a great quality to have,” said Williams. “My favorite part about serving in Spain is experiencing this incredible culture.”

Hope is on the other end of the line

GATESVILLE – The mission of Albemarle Hopeline is about as clear as it gets…. a private, non-profit organization providing comprehensive... read more