Week-Three of the high school football season actually begins tonight (Thu.) when Hertford County visits Rocky Mount. Due to the Labor Day holiday, some schools opted to play their normal Friday games a day early for the students’ sake. The independent schools have the weekend off, and tomorrow’s only game in the region is Warren County at Northampton County.

“The defense played well and we made big plays of offense,” said Red Barons coach Matt Biggy. “We are playing hard.” 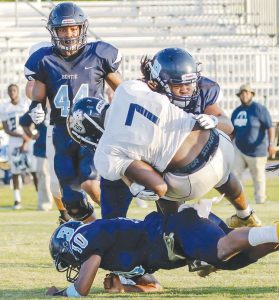 “Bertie had a big win over Northampton County,” Biggy continued. “They are talented at the skill positions and defensively they have good size. Bertie is a good team.”

“We have to continue to improve offensively,” the coach concluded. “We have to play sound defense and make tackles.”

Speaking of the Falcons’ win over the Jaguars, Bertie accomplished it with great effort on defense.

“Our defense played well, they were aggressive and they played inspired,” said Bertie head coach Grantley Mizelle. “And the offense finished drives; something they couldn’t do (a week ago) against Riverside.”

“Gates County has a big offensive line and a good quarterback to go with their great running game,” Mizelle added. “Biggy is doing a great job and their defense is playing well.”

“We have to come out and be aggressive on defense and tackle well,” closed Mizelle. “Offensively, we need to finish drives like we did in this last game.”

“It was a tough game for us,” said Bears coach Terrance Saxby. “The defense played well, but we had no rhythm offensively and penalties and turnovers hurt us.”

“Rocky Mount is very athletic,” said Saxby. “They run the Wing-T offense, and they’re good at it. They’re very fast and they’re a very good team.”

“It will be a short week for us,” the coach concluded. “We have to understand our assignments on defense and have good execution on offense.”

This Friday Warren County (1-1) comes to Gaston to face Northampton (1-1) as the Jaguars’ home stand to open the season continues.

“Warren County can run and pass as they have a balanced attack,” Privott said. “Both teams are 1-1 and nobody wants to go 1-2. They also play good defense.”

“We have to execute in all phases of the game,” Privott closed. “That includes blocking on offense and tackling on defense. We just have to play better this Friday.”