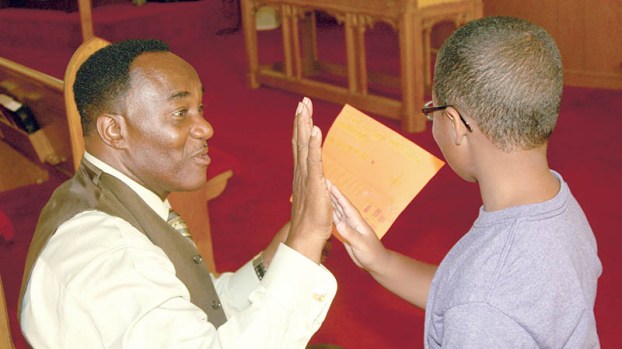 During his 10-plus years as pastor of New Ahoskie Baptist Church, Rev. C. David Stackhouse has served as a mentor and role model to young people. He is leaving Ahoskie to accept a similar post at a church in Hoke County. | Staff Photos by Gene Motley

AHOSKIE – His mantra is: ‘We elevate higher to emerge stronger’.

If you ask Rev. C. David Stackhouse, pastor of New Ahoskie Baptist Church and Ahoskie’s Mayor Pro Tem, he’ll tell you it comes from the tobacco fields of Cumberland County.

“My dad had no education, but he told me ‘you’re a poor boy, but you’re a good boy’; and that’s what I strive to live by because the Bible even teaches it. He said there’s something greater than us, and with education we can achieve it.”

The Bible and teaching beyond the classroom have been a big part of Stackhouse’s ministry as well as his life of public service.

“Whatever is good enough for us, when it comes to God, it’s got to be better,” he adds. “If I wouldn’t have it in my house, I certainly won’t have it in God’s house.”

Always one to cut a dapper figure from his neatly coiffed hair to the evenly tailored suits down to his always-shined shoes, Stackhouse appears to be a ‘Pied Piper’ leading about a flock of youngsters, whether in counsel or through his ministry.

He is leaving New Ahoskie Baptist Church, along with his Town Council post, to take a pastoral position at Lewis Chapel Missionary Baptist Church near his birthplace of Fayetteville. His son, Christopher Stackhouse, is the pastor there now – having taken over from noted North Carolina theologian Dr. John D. Fuller. The elder Stackhouse will join his son, but in a different church under the umbrella of New Bethel – as site-pastor of Lewis Chapel Missionary Baptist Church-West – in the small Hoke County community of Raeford.

As his tenure in Hertford County – where he was also on the Board of Trustees of Roanoke-Chowan Community College – comes to an end, he hopes his work with young people, both in his professional and political life, will continue.

“What motivates me is like that young man there,” he notes as he gestures to one of the youths in his company. “They may come to me with anger rising within, and parents confounded on what to do with them, but part of me making a difference in these kids’ lives is what gets me up in the morning.”

In addition to mentoring young people in the schools three days a week and championing an After School Tutorial Academy for the youth of Ahoskie, Stackhouse also delivered Meals on Wheels, drove citizens seeking employment to prospective jobs, and provided a computer lab within his church for the community to access and sharpen their skills.

“I gladly dedicate myself to being a community servant,” he once said.

Other parts of him on the pulse of the town, which he served for six years as a town councilman include: Right Moves for Youth Coordinator/Facilitator; a member of both the Ahoskie Kiwanis Club and Ahoskie Rotary Club; NAACP Executive Board Chairman; Social Services Collaborative Board member; fifth and sixth grade basketball coach; and hardly lastly, community activist.

He helped start ‘Unity in the Community’, meeting with residents in their neighborhoods to discuss their issues and seek their input. Annually, Stackhouse led a MLK Day March through the city, and was forever there for congregations and constituents, when needed.

When he interviewed for the pastor’s position at New Ahoskie Baptist in 2008, Stackhouse spoke of his ideas for the church and the community, but he faced quite a few skeptics.

“They thought I was trying to impress them with what I had done in (his former ministry at) Charlotte,” he recounts. “Yet, here was a church in the heart of the community, and that excited me. My catch-phrase became: ‘Stack the House’. It was not because of me, but my belief that God has given me a dedication; a divine assignment.”

Stackhouse called the decision to leave Ahoskie the toughest he has ever faced. Ordained at age 17, he moved to Charlotte and for 35 years prior to his calling at New Ahoskie in 2008, he has ministered both in AME Zion and Missionary Baptist sanctuaries. As for politics, he freely admits he sort of ‘stumbled’ into it.

Others like (Hertford County Commissioner) Ronald Gatling, Andre Lassiter, and (Hertford County School Board Chairman) David Shields are the ones he says goaded him into taking the political plunge.

“They wanted me involved, not just to be there, but to be there in a leadership position,” he acknowledged. “Whether it was Rotary, the Kiwanis, they were all my supporters; and they told me that I could get it done.”

Stackhouse said no matter what challenging and trying situations he found himself in, he always kept love foremost in his heart and actions; something he says he learned from his mother.

“If I ever step out of the realm of love, then I believe God will take his hand off me,” he noted. “The poem says ‘love was not put in our hearts to stay – love is not love until you give it away.’ The reason this is so difficult is because I feel I’ve touched – and been touched by – so many lives here in Ahoskie. People are constantly coming up to me and my wife (Renee) and saying, ‘This is what you’ve done for me, for my child,’ and I’m just doing what I feel I’ve been assigned to do.”

As much as he must shake off any shackles of regret, Stackhouse maintains he’s excited about what the future holds for him in Cumberland and Hoke counties with his new venture.

“Three years ago, Dr. Fuller approached me and said what he needed was a Stackhouse ministry, and I told him I had everything I needed in Ahoskie. Then two years ago my son said it would be great if he and I were co-laborers in this ministry,” the pastor stated.

Starting in September, Stackhouse will go from a church with a membership in the hundreds, to one with 19 members.

“I told my wife that God would have to do his greatest pastoring through us now,” he related. “But the harvest could be plentiful, because I’ve been told they are ready for this ministry.”

In addition to his son and family, Stackhouse will be near his 90-plus year old mother. He will be a welcome presence given her age and the comfort he will be able to provide.

As he leaves political office to once again enter full-time ministry he’s leaving the door open to his future. He admits family would like him to keep his vision singular, but he says he will just follow the wisdom of God.

“Right now, I have no idea about that,” he mused. “I’ve always been an activist, but I don’t know what this next phase has in store, only that I’m excited about what’s going to happen.”

JACKSON – The Northampton County Board of Commissioners approved an application for the Needs Based Public School Capital Fund during... read more