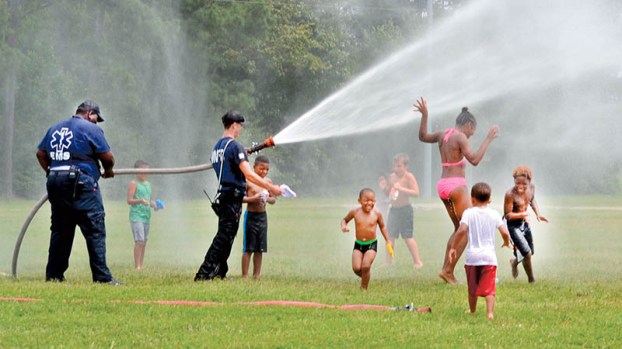 Local firefighters use a light spray to cool off these children on a hot day, part of the activities at an event held in Jackson and hosted by Project Lift and the Northampton County Sheriff’s Office. | Photos by Betty F. Jones and Danny Bowman Jr.

Despite the weather being extremely hot and muggy, everyone was in a festive mood. A breeze coupled with free iced bottles of water, juices, canned soda, water guns, fire hoses and other wet games kept everyone cool.

A huge tent housed DJ Chozen and his “kicking” sound equipment. Free prizes including three bicycles, 30 bookbags and a huge assortment of other gifts were on display awaiting the prize drawings.

Tables and chairs were available for people to sit and catch their breath. There was a flavored ice truck serving flavored ice that the older crowd used to call snow cones. Kids received tickets to get their free treat.

As one walked around the carnival, one could toss a ball at the water dunking booth, slide down the giant water slide or jump in the bouncy house. Kids were given tickets to enter into drawings for the bicycles, bookbags and other toy prizes. Raffle tickets were for sale for a two-day, one-night suite stay with two free adult breakfast buffets and free children’s buffet at the Hilton Garden Inn. 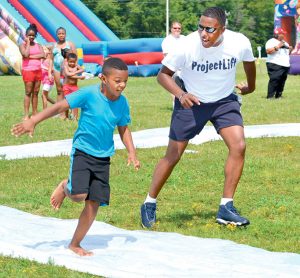 Project Lift co-founder Christon Martin encourages this youngster to gain speed as he heads down the “base path” as part of a kickball waterslide game.

When you got hungry, the enticing aroma of BBQ chicken legs, hamburgers, hot dogs, baked beans, cole slaw and potato salad called you to get a heaping plateful. A popcorn stand was also a big hit with the kids.

During the event, the police and the kids had an old timey water gun fight, which ended with drenched “kids” on both sides. A more powerful version of the water hose was used by the fire departments to douse the children. Everyone had a ball.

Speaking of a ball, the kickball waterslide game was open to all ages. The game was set up with 1st, 2nd, 3rd bases and a home base. At each base was a kiddie pool with collapsible sides. Plastic runs connected the bases. Plenty of water and soap made for a super slippery run. A pitcher put the ball to home plate. The batter kicked the ball. The splishing, splashing, falling and all kinds of gyrations occurred as the batter attempted to somehow get to each base. The other team tried to get the runner out by throwing the beach ball to connect with the acrobat trying to get to each base, much to the delight of the audience, who had just as much fun as the kids.

Deputy Sergeant Carter, who also has a tree cutting service, donated a bicycle. Project Lift donated two bicycles, and a laptop. Thirty bookbags were donated anonymously. The Halifax County Health Initiative donated $150 from which three, $10 gift cards were given as prizes. The rest went to purchase squirt guns and other supplies for the event.

The rest of the prizes were made by various donors.

At varying times during the day, people were called to the tent for the different prize drawings. Northampton County Commissioner Geneva Riddick gave a brief talk showing her support.

The money raised from the Hilton raffle tickets and other

donations were given to make Jalik Drew’s birthday special, including a stretch limo ride to the event. Project Lift and Jalik’s parents partnered to make this possible. His birthday party was to be Saturday, Aug. 25. He was battling stage 4 cancer and because of his weakness wouldn’t have been able to come home, so Project Lift and others were going to take the party to Raleigh for him. Sadly, Jalik passed away just a few days prior to his birthday.

The Roanoke-Chowan News-Herald would like to extend hugs, prayers and our deepest condolences to his family and friends.

The laptop was donated to Northampton County resident Bryson Taylor. He was given the mic and he expressed his appreciation. He will be beginning college life shortly.

Christon Martin closed by asking all prize winners to assemble for a group shot.

This event was made possible by the unified efforts of Jackson, Woodland, Gaston Fire and Rescue, the Gaston Police Department and the Northampton Sheriff’s Office. Sheriff Jack Smith was unable to attend due to other commitments. 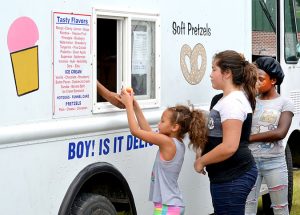 Those attending the Lift Day event found another way to cool off by purchasing flavored ice.

In all, approximately 10 firemen, 15 deputies and five rescue personnel attended and were encouraged to help bridge the gap between these young citizens and authority figures. This helps young people realize they can go to these authority figures for help and safety if needed. The goal was to help build trust between them, which was accomplished by the end of the day.

Project Lift was co-founded four years ago by Christon Martin and his wife, Krissy, who also serves Director of Operations.

“This is our 3rd annual Lift Day event,” Northampton County Deputy Martin said. “We also did Halifax County’s Lift Day on Sunday. We rented the TJ Davis Rec Center. The previous events were held in Seaboard the prior years.

“Our goal this year was to make this into county events. My goals, dreams and aspirations as a kid were changed, tarnished and delayed by hanging with the wrong crowd and doing wrong things, nothing illegal, but this robbed me of my focus,” he added.

“Our mission is to empower and encourage young people to reach their full potential,” Martin continued. “Our motto is “Leading the Way.” Our purpose is to give kids things they don’t get in life.”

Martin said Project Life also sponsors 100 kids each summer for camp, which is currently held at Weldon Elementary School. The camp includes various workshops and trips to Raleigh and other cities.

“The county as well as Weldon helps with this event,” he said.

“We also have basketball camp. We have a mentoring program for at risk kids. We offer assistance for people in need,” Martin added.

“Today’s Lift Day event is to strengthen relationships between law enforcement and citizens, young and older into positive bonds. We also sponsor Fun Day and Back To School Bash in both counties,” said Martin. “My wife and I are members of Church of Deliverance of Weldon. Our church, public service buddies, and others support Project Lift’s various endeavors. Our organization currently has 15 members including family and friends. Our DJ Chozen is a member.”

POWELSVILLE – With Principal Melissa Grimes telling her staff that the North Carolina public school education standards will be their... read more