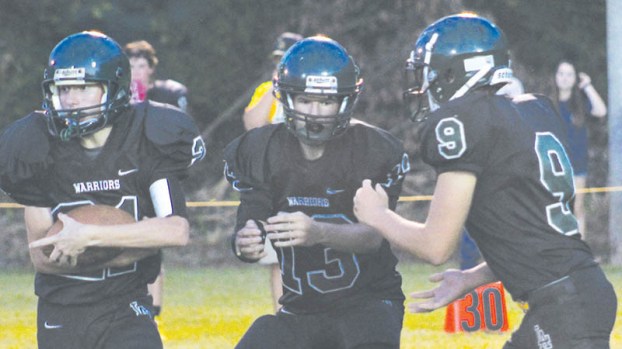 Lawrence Academy players (from left) Brian Hughson, Tyler Wheeler, and Charles Atkins run a double-reverse Friday night against Community Christian. The LAW varsity, playing for the first time in over a year, fell to the Cyclones 36-6. | Staff Photo by Gene Motley

MERRY HILL – The scoreboard may say Lawrence Academy fell to Community Christian School 36-6 last Friday night, but the young Warriors have plenty to hang their hat on.

Victimized by big plays, and a tough time stopping stout-hearted 210-lb. Cyclones fullback Gavin Wiley – who finished with 111 yards rushing and accounted for five touchdowns – the LAW varsity made a return to varsity 8-man football after playing at the junior varsity level in 2017.

CCS opened with a 51-yard drive, all but 33 of them on carries by Wiley. The last 33 was a Reese Bartlett to Dylan Manning touchdown completion. Bartlett ran in the point after for an 8-0 Cyclones lead.

Lawrence opened their drive with a flea-flicker, Sawyer Mizelle to quarterback Tyler Wheeler for a 27-yard gain. But the drive ended with a Warrior fumble at CCS’ 10-yard line recovered by Community and converted into a 90-yard drive and a 14-0 lead that held up through the end of the first quarter.

CCS got their third score, again from Wiley, early in the second quarter for a 20-0 lead. Lawrence then drove to midfield, but was stopped on downs. Six plays later, Wiley had his third score for 28-0 Cyclones bulge.

With 2:42 to go until halftime, Mizelle took the CCS kickoff for a 12-yard return. The clock ticked away as the Warriors looked stopped on their 45, but a penalty on the Cyclones gave the home team a first down. With just 14 ticks left of the clock, Wheeler hit Brian Hughson on a go-route, 40 yards out, and he scampered untouched to the end zone for the Warriors first score, making it 28-6 right before the half.

Following a scoreless third quarter, Community went on a clock-eating 71 yard drive capped by Wiley passing for his fourth score and a conversion that made for the final 30-point margin. But LAW had held the 2017 1A semi-finalist to a lone 2nd-half touchdown.

“This was a jayvee team last year,” said LAW head coach Lee Hoffman. “It’s a young team, I’m happy with the effort, and we’re going to get better.

In two weeks, Lawrence (0-1) will face off against Halifax Academy while Community (1-0), will take on Pungo, both at home at 7 p.m.