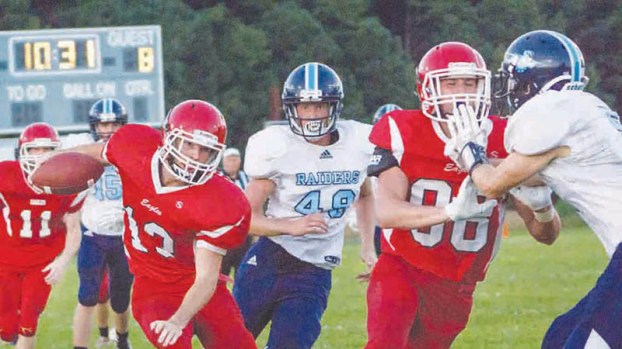 LASKER – The Northeast Academy-Hobgood Academy co-op football team known as the NHA Eagles began defense of their 2017 NCISAA 1A State title here Friday night with a 60-14 thumping of the Raiders from Pungo who were playing their first varsity football game in 30 years.

The evening began on a positive note for the Raiders as they won the opening coin toss and elected to defer and kick-off to start the game. Things then went downhill as junior Ty Mathewson took the opening kickoff on the Eagles’ 22 yard line and ran untouched for a 78 yard touchdown. The two point conversion was good and NHA had an 8-0 lead with only a few seconds off the clock.

A four and out gave the NHA team the ball on their own 39 yard line. From there senior running back JT Simmons took over. Following a line comprised of seniors Nick Trevino, Michael Smith, Noah Lassiter, and Alex White, JT Simmons began his 294 yard, five-touchdown rushing night by scampering around left end for 27 yards which led to senior Ryan Rowe completing his first and only pass of the evening to senior end Justin Jones for 35 yards and a touchdown. Another successful two point conversion gave the home team a 16-0 lead.

On the second play from scrimmage following the NHA kickoff, sophomore Alex Galloway returned an interception 30 yards to set up the Eagles next scoring drive at the Raider 20 yard line. JT Simmons covered the distance in two plays cashing in from the 16 yard line on his second rush. This time the two point conversion failed, but the Eagles still held a 22-0 lead at the 5:32 mark of the first quarter.

A four and out led to another Pungo punt. Following a NHA fumble, the Raiders took over at their own 45 yard line. Again they were forced to punt. The kick was returned 35 yards by Galloway setting up the Eagles at their own 40 yard line. This time, JT Simmons’ younger brother, junior Josh Simmons, got in on the act, covering 60 yards going up the middle and cutting to the sideline outrunning the defenders. The touchdown and successful two point conversion gave the Eagles a 30-0 lead with 90 seconds remaining in the first quarter.

Following another Pungo four and out, the Raiders turned the ball over on downs and NHA took over at their own 33 yard line. This time both Simmons boys got into the act alternating carries with JT covering the final 11 yards for another touchdown. The two point conversion was unsuccessful and NHA maintained their lead 36-0.

The Raiders then broke through on the scoring column as senior running back Benjamin Simmons took the kickoff 85 yards for a Pungo touchdown. The two point conversion was good and NHA held a 36-8 lead with just under 11 minutes to go in the first half.

Following an onside kick, NHA took over at their 46. A couple of penalties set them back to the 35. JT Simmons was again turned loose as he covered the final 57 yards in one galloping run for a touchdown. The two point conversion was good and NHA held a commanding 44-8 lead.

Pungo was again forced to punt and NHA took over on their 20 yard line. A seven-yard run by Rowe, followed by the Simmons brothers again alternating carries, led to a 38 yard touchdown run by JT Simmons. Another two point conversion gave the Eagles a 52-8 lead with 4:12 left in the half.

With the clock running and subs playing there was no scoring in the third quarter. The fourth quarter saw Pungo move the ball using a gadget play, a flea flicker that got them down to the NHA 14 yard line, but an interception by Mathewson gave the ball to the Eagles at the six-yard line. On the first play from scrimmage following the interception, JT Simmons cut through the Raiders defense for a 94 yard touchdown run. The two point conversion gave the Eagles a 60-8 lead. After a procedure penalty on the kickoff by NHA, Pungo took over on the NHA 45 yard line. A ten yard run by Stephen Pugh set up a 35 yard touchdown pass from Pugh to Benjamin Simmons as time expired giving the final score 60-14.

The Eagles unofficially amassed 408 yards on the ground with JT Simmons accounting for 294 of those along with his five touchdowns. Special teams also played a large part with some good punt returns and Mathewson’s opening kickoff return for a touchdown. The Eagle defense was also stellar as they allowed minus 21 yards rushing and 100 yards passing to the Raiders’ 79 yards of total offensive yards. The NHA defense also picked off the Raider quarterback twice to go along with several sacks.

The NHA title defense got off to a good start. The next step in that defense will come at Bethel Christian Academy in Kinston on Sept. 7. Meanwhile Pungo will seek to improve against Community Christian of Wilson also on Sept. 7.