Several teams got off to a winning start to their high school football season last Friday night; some teams fought hard but came up short. For those, and for the winners, Week-Two offers redemption. Also, the Colonial Carolina Conference independent schools will be starting their season with one team making a return and another defending a state title.

Last Friday Bertie fell in its season opener at Roy Bond Stadium to Williamston Riverside in a close game, 34-28.

“We had some penalties,” said Bertie coach Grantley Mizelle. “We clean them up, and we’re not a bad football team.”

This Friday, Bertie (0-1) travels to Gaston to face Northampton County (1-0).

“Northampton is a very good team,” continued Mizelle. “They have a good coach in George Privott, they play hard, and they have a good quarterback and running back.” 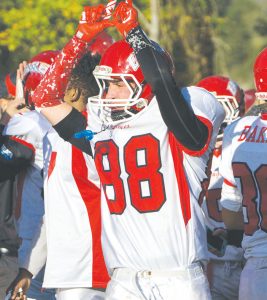 “For us to win, we have to play good defense and finish drives on offense,” closed Mizelle.

Northampton opened its season avenging the only team that defeated the Jaguars in the regular season a year ago; downing Roanoke Rapids 42-23.

“The defense played well,” said Jags coach George Privott. “We caused turnovers and took an early lead and went on for the win.”

“Bertie is a good team,” the coach added. “They are a good running team and also they sport a passing attack we have to prepare for.”

“We have to block well, eliminate turnovers, and play well on defense and special teams,” Privott concluded.

Last Friday Hertford County lost a close game to Gates County 21-20. It was the first time the Red Barons had beaten the Bears since 2001.

“Hunt is a very big and physical team,” said Saxby. “They are very good; they have a power running game, and have good running backs.”

Thanks to a late score, Gates County did something they hadn’t done in 17 years: beat Hertford County.

“We played hard,” said Red Barons coach Matt Biggy. “We made big plays offensively and defensively, and that’s what got us the win.”

This Friday, the ‘Barons (1-0) will look to shock another 2A squad for the second week in a row, as Oxford Webb (0-1) is coming off a 43-6 loss on the road to Wilson Beddingfield.

“Webb runs the spread offense,” observed Biggy. “They have a good quarterback and running game, and they also pass the ball well, and their defense is also good. Also, they are coming off a loss for their season opener.”

“We have to keep getting better offensively and defensively,” the coach concluded. “We need to improve our game everywhere.”

For the first time in 24 months, there will be varsity football under the lights in Merry Hill at Lawrence Academy. The Warriors did not field a varsity team in the Colonial Carolinas Conference last season, opting instead to play a junior varsity schedule.

Friday night, Lawrence (0-0) will open the season against Community Christian School of Wilson (0-0), a team that made the playoff semi-finals last year before losing to eventual state champ, Northeast-Hobgood.

This season, all the 1A independent teams in the Colonial will play each other twice – except for one opponent, meaning these teams won’t have to face any of the larger enrollment 2A clubs.

“We probably won’t throw it more than 30 percent of the time after this week,” said LAW coach Lee Hoffman. “I don’t know a lot about them because it’s hard to compare last year to this year, especially with so many of his starters having graduated.”

“We’re excited to be playing varsity football again,” closed Hoffman. “The kids are excited, the school is excited, and everybody’s excited. It’s been almost two years.”

For the second year in a row, Northeast Academy and Hobgood Academy are combining forces to create one co-op team. Even though a number of 2017’s starters – that won graduated, there is still enough firepower to field a strong squad.

“We’re going into every game like we’re the underdog,” said Coach Brandon Lanier. “We’re not looking for a letdown, but we don’t want to be complacent.”

This Friday, the Spartans (0-0), as the team will be known, will open against a team playing their very first game of varsity football, Pungo Christian Academy (0-0), which – like Lawrence – only fielded a J.V. team a season ago.

“We didn’t play them in jayvee last year, so I know nothing about them,” added Lanier. “For now, I’m just anxious to see what we’ll have on the field. We spent the pre-season working on fundamentals and everybody but one player played for us last year; so for now, it’s just a waiting game.”

Down to the wire