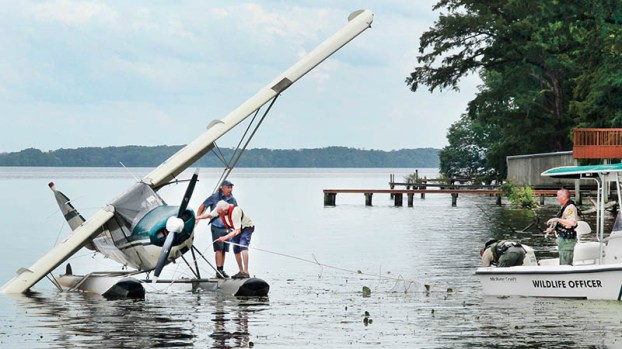 Henry Joyner’s crippled seaplane had to be towed to shore on Tuesday after experiencing a mechanical issue upon landing on the Chowan River near Holiday Island. | Staff Photo by Cal Bryant

HARRELLSVILLE – After logging in excess of 24,000 hours of flight time over the course of his 56-year career as a pilot, chances are good that Henry Joyner can share quite a few interesting stories.

Having his vintage training plane towed to shore by a boat can now be added to that list.

Joyner, accompanied by a student pilot, had that to happen near here Tuesday. After his plane, equipped with pontoons, completed a successful landing on the Chowan River near Holiday Island, a mechanical issue occurred, prompting a call for help.

“It wasn’t a hard landing as first reported. Rather what actually happened was that a bracing rod on the floats failed and allowed the wing to drop slowly in the water,” Joyner said.

“The aircraft had just landed and was stopping in the water when it happened. It was a mechanical failure and not pilot error,” he added.

Upon learning of the incident and not knowing if it was a dire emergency, local first responders quickly made their way to the river’s edge at Choanoke Shores, located just outside of Harrellsville.

“Luckily no one was hurt,” said Tim Wadsworth, a North Carolina Wildlife Commission Officer whose boat was used to tow the crippled aircraft safely to shore. “Henry and the other pilot were standing on the pontoon section of the plane when I arrived on the scene. They were waiting for help to arrive. I was happy to see that they were both okay.”

Wadsworth noted that the Winton Fire Department launched their boat and arrived on the scene a few minutes earlier.

“I was able to tow the plane to Choanoke Shores where we secured it to a pier,” Wadsworth said. “Henry said he would be able to get it from there back to his home at Tuscarora Beach, where he keeps the plane, and make the necessary repairs there.”

Wadsworth added there was no fuel leaked into the river.

“Everything on the plane was intact; it didn’t flip over,” he said. “One of the wings was partially in the water due to the bracing rod that failed. Knowing Henry like I do he’ll have it fixed and back in the air in no time.”

Wadsworth said due to the fact that the plane did not crash, there was no reason to contact the Federal Aviation Administration.

“This was a case of a mechanical issue occurring after the plane had landed,” Wadsworth said.