The two-story home, located at 810 West Memorial Drive (less than one-half block behind Vidant Roanoke-Chowan Hospital’s employee parking lot), was unoccupied and up for sale at the time of the fire, according to Ahoskie Fire Chief George Michael Bradley.

“We feel strongly that the fire originated in the basement of the home, but we are still investigating how the fire started,” Bradley said.

Due to the demand for water to help extinguish the fast-moving blaze and because of the exposure of nearby homes and residents, Bradley called for immediate assistance. 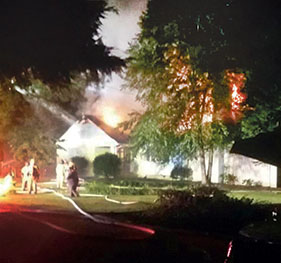 Smoke and flames fill the Tuesday night/Wednesday morning air along Memorial Drive in Ahoskie where a two-story home was destroyed by fire. | Contributed Photo by Henry Daniels

“We (Ahoskie Station One) and Station Two (Ahoskie Rural) are always paged out together, so I knew we would have a good team on the ground fighting the fire,” Bradley said. “But it didn’t take long to realize how fast the fire was spreading and with this house being in a fairly good-sized residential neighborhood, I felt the need to ask for assistance.”

Firefighters from Winton (seven men, with a ladder truck and one engine) and Union (eight men, and two engines) responded to Bradley’s call. That was in addition to the 24 firefighters and four trucks that responded from Stations One and Two.

“The Ahoskie Rural ladder truck was the lifesaver,” Bradley noted. “We appreciate all the help we received from the other departments.”

Bradley said one Ahoskie firefighter was injured during the blaze.

“He hurt his leg when falling down the stairs in the home,” Bradley stated, adding that the fireman was treated and released from Vidant R-CH.

Also responding to the scene were two units from Hertford County EMS. The Ahoskie Police and deputies with the Hertford County Sheriff’s Office blocked off the streets in and around the fire scene to aid in traffic control.