NASHVILLE, NC – Betty Lou Brown (Lou) Vann, age 96, passed away peacefully Monday, August 20, 2018 at the home she shared with her daughter and son-in-law, Mary Vann and Bob Sitton. All her children were at her side as she gently left this earthly life.

Lou was the last child born on April 22, 1922 to Mary Elizabeth Alston Brown and Henry Newton Brown on the family farm between Powellsville and Trap in Bertie County. 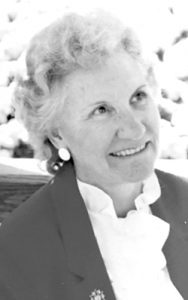 Lou and Thomas lived the Army life for 30 years. Posts included Ft. Monroe and Ft. Eustis, Virginia before WWII broke out and Thomas was away for two years in Europe. Lou moved back to the family farm with Tommy, Jr. where she helped her father manage the farm. Lou would drive the truck to the POW Camp in Ahoskie to pick up German prisoners there to work on the farm.

After the war, she and Thomas were stationed at Fort Meade, MD where Tim was born. In 1949 the family was off to Germany where Thomas assisted in post-war reconstruction. Duty again called Thomas to Korea in 1952. Lou gave birth to Mary while he was there and kept the family together for 18 months. Additional posts in Mexico, Texas, Germany and back to Ft. Meade rounded out a life of service. Lou was always a ready partner to “get up and go” and well knew the life she led as a “soldiers wife” assisting her husband in his work with the U.S. military to keep America safe and free.

Lou and Thomas semi-retired to Murfreesboro, NC in the fall of 1969. In Murfreesboro she enjoyed her work and friends with the Ahoskie Hospital Auxiliary, Murfreesboro Historical Association, and the Murfreesboro Garden Club. She very much enjoyed visiting with brothers and sisters, family times at the Chowan River (Mount Gould) and trips around the country with Thomas that rounded out their life together. Lou was a long-time member of Murfreesboro Baptist Church.

A private, graveside Celebration of Life service for family will be held at 11:00 a.m. on Sunday, August 26, 2018 at Riverside Cemetery with Lou’s nephew, the Rev. Charles Thompson officiating.

The family thanks the dedicated and caring staff at Community Hospice of Rocky Mount for their help during the past few months.

Funeral services are provided by Garrett-Sykes Funeral Service of Ahoskie. Online condolences may be sent by visiting www.grrettsykesfs.com Flowers will be accepted at the funeral home and donations in her memory may be made to Chowan University.