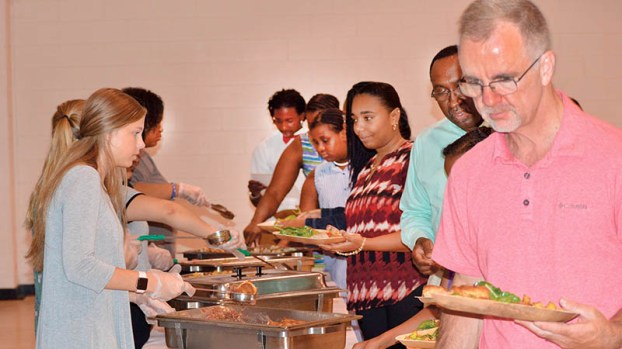 This event provided a platform to recognize volunteer achievements and gain awareness of strategies to improve local community health by increasing access to fresh fruits and vegetables. It is critical to have safe places to provide an enjoyable meal made with locally grown produce. 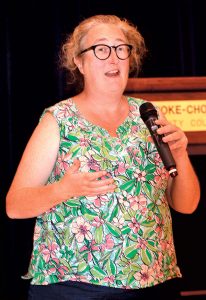 Jennifer Smyth and Jason Brown served as the two keynote speaker at the dinner.

He said we have to be careful in the garden because potatoes have eyes and corn has ears.

North Carolina’s First Lady Kristin Cooper was introduced by Pastor Villegas. Cooper expressed her support of the program. She said they had a garden on the Governor’s mansion property.

Pastor Villegas told us the dinner plates were compostable. He offered a moment of thanks and invited everyone to partake of the Farm-to-Table dinner. The buffet included stuffed chicken, potatoes, vegetable medley, a variety of breads, desert, iced tea and water. Everyone enjoyed their delicious meal.

RaQuan Leary and Jamie Earley, both Garden Stewards, introduced folks to the Farm to School to Health Care Program.

“This spring we incubated eggs successfully. The chicks are being raised by others now, but we will get them back. RCCC is making the chicken coup and Steven Hollingsworth’s Eagle Scout project was to build a chicken run,” Smyth said.

Allen Cooke caught a swarm of honeybees last spring which are housed in a two box hive.

To make the projects successful, 12 garden stewards volunteered their time even during summer break.

Smyth presented a student project slide show that showed the projects – past, present and future.

She addressed the Pop-Up Market concept and the MD voucher process to receive free produce.

Jason Brown, who also served as a keynote speaker, began with his wisdom of life speech. He said if he could eat dinner with three people, his first would be his grandfather.

“He was a successful farmer,” Brown stated of his relative. “Non-farmers would make fun of him because he was a farmer. Of course he and his family had full stomachs while some non-farmers didn’t. For Christmas he gave family a country ham, a 50-pound sack of beans and other farm goodies.”

The second would be his brother, Lunsford Bernard Brown II, known as Deucey to the family.

“Deucey joined the military two days before the September 11 Twin Tower tragedy,” Brown recalled. “He was later killed in action. I respected my brother who asked me what I was going to do meaningful with my life. I was a professional football player.” 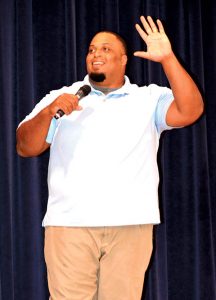 The third person rang his doorbell but it went unanswered on numerous occasions since he saw no one through the peephole. On his 27th birthday, the same age as his brother who was killed in action, he decided he needed to do something meaningful with his life.

“The doorbell rang again and I opened the door and Christ came into my life,” Brown proclaimed. “I asked “Him” what I needed to do. He said farm. This was First Fruits Farm inception.”

Brown quit professional football and bought a 1,000 acre farm near Louisburg in 2012. He decided to plant sweet potatoes on five acres.

“I asked “Him” how I was to harvest my crop,” Brown shared with the audience.

“Of course “He” said to give my crop away, so he told them they could have all the first quality sweet potatoes they needed,” Brown stated.

He added a lady came up to him at the store and hugged and thanked him for the sweet potatoes she got. She said it fed her family for a whole week.

“The First Fruits Farm is still a success,” Brown continued.  “I’m a preacher, my wife and nine children who are with me tonight show their support.”

Jendayi Joell, Diversity In Conservation Intern and AmeriCorps Service member, recognized student Ra’Quan Leary, Jamie Earley, Brianna Howard, Keishara Smith, Jackson Liverman and Bentlee Mayle for their work as Garden Stewards. Jennifer Smyth was also recognized, as well as others. Plaques were given to the recipients.

By LANCE MARTIN rrspin.com ROANOKE RAPIDS – A Murfreesboro man was charged last week in a June 4 shooting outside... read more