Down to the wire

GATESVILLE – The sport of high school football is a 48-minute game.

Greg Crandol scored on a two-yard run with exactly one minute remaining and Caleb Brickhouse split the uprights with the all-important PAT kick as Gates County stunned Hertford County, 21-20.

The game-winning drive came courtesy of a Hertford County fumble with 3:42 left in the game. Gates County defender Rayvon Riddick recovered the fumble at the Bears 43 yard line, giving his team – trailing 20-14 at that point – new life. 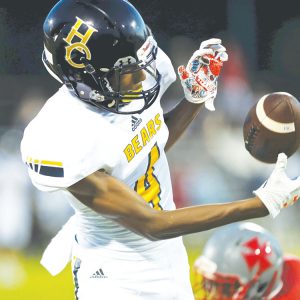 Hertford County’s A.J. Hoggard hauls in a Tye Saxby pass for the game’s first score in Friday night’s Bears game with Gates County. Hoggard finished with 81 receiving yards, but it was the Red Barons’ who prevailed in the end, 21-20. | William Anthony Photography

The Red Barons then put together a seven-play, game- winning drive. The key play was a third down and eight snap from the 41. There, Jawan Riddick tossed a 34-yard pass to Kalab Logan. That gave Gates a first down and goal to go from the HCHS seven yard line.

Four plays later from the two yard line, Crandol took the hand-off and ran straight into the teeth of the Hertford County defense, but a great push from the Red Barons offensive line gave Crandol just enough room to find the end zone

The home-standing Red Barons also gave their fans something to cheer about early in the game.

Late in the first quarter, a low snap to the Hertford County punter resulted in a loss of 11 yards, allowing the Red Barons to take possession on loss of downs at the Bears 24 yard line.

Senior running back Ron Olsen took over from there, first with a 14-yard run followed by a 10-yard touchdown run. Brickhouse added the PAT for a 7-0 lead with 3:35 left in the opening quarter.

On the third play of the second quarter, Hertford County’s Michael Savage recovered a fumble at his own 20 yard line to stop a Gates County drive. From there, the Bears marched 80 yards in just five plays capped by quarterback Tye Saxby’s 69-yard touchdown pass to A.J. Hoggard. The conversion pass failed, leaving the Bears trailing 7-6 with 9:37 left in the second quarter.

Gates County answered on the game’s ensuing possession. Taking over at their own 20, the Red Barons drove 80 yards in 12 plays. The drive featured Olsen carrying the pigskin six times for 36 yards. It was kept alive on a fourth down play where HCHS was flagged for 15 yards when they roughed the quarterback.

Riddick ended the drive with his one-yard run to paydirt. Coupled with the PAT kick from Brickhouse, Gates owned a 14-6 halftime lead.

Hertford County rallied in the second half, scoring once in third quarter and one in the fourth period to grab a 20-14 lead. 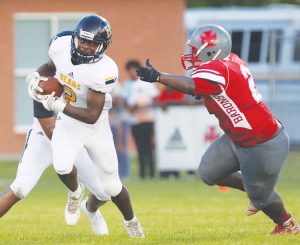 Amajhea Smallwood (in white) tries to evade a Gates County defender in Friday night’s game. Smallwood led the Bears with 65 yards on the ground, but the ‘Barons beat the Bears for the first time since 2001.

The Bears caught a break when the ball was snapped high over the Gates County punter’s head and Anron Bond recovered it on the Red Barons one yard line. Saxby ran it in from there, but the conversion pass again failed, leaving the Bears with a 14-12 deficit with 7:48 left in the third quarter.

Later in the third quarter, the Bears began a drive at their own 16 yard line. Saxby went to work from there, first connecting on a 25-yard pass to Jordan Moore. Six plays later, Saxby tossed a 47-yard scoring pass to Jalen Davis. Saxby ran in the two-point conversion, giving the Bears their first lead of the game, 20-14, at the 10:48 mark of the fourth quarter.

Gates County had 275 total yards, with 201 coming on the ground. Olsen led the rushing attack with 29 carries for 123 yards.

Hertford County finished with 258 total yards, with Saxby’s 191 passing yards accounting for the majority of his team’s offense.

Both teams will be in action again on Aug. 24 with the Bears at home vs. Wilson Hunt and the Red Barons visiting Oxford Webb.