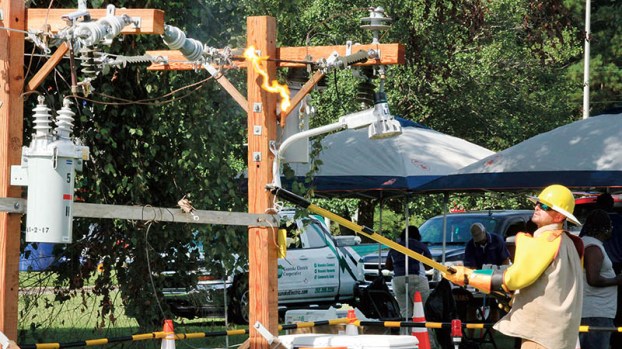 AHOSKIE – Curtis Wynn said he has always lived by the philosophy to never mention a problem or an issue without offering a response.

He has carried that philosophy into his role as the CEO of Roanoke Electric Cooperative and it has served him well for the past 21 years in that position.

At Saturday’s annual meeting of REC – a local energy co-op that’s been in business for 80 years – Wynn found himself having to bank on his well-used philosophy to explain to the near 400 members-owners in attendance the reasons behind a pending hike in their electric bills and then offer suggestions of how they can soften that blow to their wallets.

“After six years of stable rates, unfortunately we’ve reached a point that we must increase these charges,” Wynn stated, noting that the last rate hike to REC members came in 2012. “Fifty-eight cents of every dollar we spend goes to pay for the electric power we purchase. Those costs have increased 20 percent since the last time we passed along a rate hike to our members.” 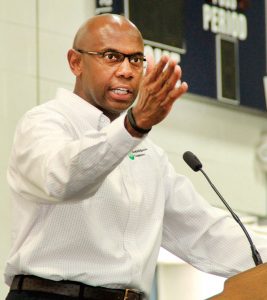 Curtis Wynn, CEO of Roanoke Electric, makes a point about how REC members can save money on their monthly bills.

This adjustment, Wynn noted, comes due to several factors, including an increase from the provider of electricity (REC does not generate its own power; it is purchased from a whole seller); the lack of residential and commercial growth (members/customers) in the company’s seven county service area; and a cost of service study the co-op conducted to ensure that electricity rates are adequate to recover the co-op’s power costs and operating expenses for the next several years.

“Without growth in population and ultimately the number of member-owners to whom we provide service, the rising cost to run the cooperative is shared by a fixed or decreasing number of people,” Wynn reported.

All of that figured into a need to implement an average 13 percent increase beginning Nov. 1. An average residential user of 1,000 kWh per month will see a $22 increase.

Additionally, Wynn shared the news that the Basic Facilities Charge on the monthly bill will increase from $25 to $29.50. That monthly fee helps REC maintain its equipment, such as electric wires and transformers.

“In order to pay for the millions of dollars of investments we’ve made and are making to maintain our electrical system, a portion of those funds were borrowed,” Wynn noted. “As you can imagine, when you borrow money you have to pay interest, which adds to our interest expense.”

Another monthly increase will come in the form of a new surcharge to cover REC’s share of the costs incurred by Duke Energy’s state-ordered remediation for a coal ash spill in 2014. Duke was assessed fines and paid for costs associated with cleaning up the polluted areas.

“A few years ago the state passed a law known as the Coal Ash Management Act, and Duke has been permitted to pass on some of the newer costs to comply with making sure this (coal ash spill) doesn’t happen again to ratepayers throughout the country, including North Carolina. We have been assessed some of those fees and those costs will come our way in the upcoming years; mostly in 2019 and 2020,” Wynn observed.

To help offset the increases to the monthly bills of REC members, Wynn said the co-op has several tools and services in place.

“We get excited about this because this is within our control; unlike the factors that cause rates to increase,” Wynn stressed. “We hope that you will work with us to reduce the number of kilowatt hours you use, which will lessen the overall impact on your monthly budgets.”

“And all of this technology is being powered by an exciting broadband high speed internet initiative,” Wynn promised as he spoke of the Roanoke Connect program that is currently underway.

Wynn said one of the biggest cost-saving measures was REC’s Upgrade to $ave program. That is a $6 million project designed to make upfront energy efficiency upgrades to member-owners’ homes, churches and places of business to reduce energy usage by as much as 20-25 percent on average.

“We are making these investments because they help keep costs down for our member-owners and Roanoke Electric Co-op. Less than one half of these funds have been used and we encourage all member-owners to see if this program is a good fit for them,” Wynn stated.

Another cost-saving effort is through Smart Energy devices such as smart thermostats and water heater controls.

“These demand response devices are saving the cooperative and its member-owners millions of dollars by enabling us to buy power when it costs less to produce,” Wynn said.

Meanwhile, REC is now in a system-wide automation and optimization stage where smarter meters and down line devices are being installed to help them optimize the amount of power they sell to member-owners; yet another way to reduce costs.

REC is also looking to expand its sources of renewable energy.

“By the end of the first quarter of 2019, approximately three percent of the power we sell to our member-owners will come from solar energy and the price we pay for that power over the next 20-25 years will be lower than the price we are currently paying for traditional sources of power,” Wynn noted. “We will continue to find more ways like this to stabilize our rates.”

He added that Roanoke Connect was created so that reliable and affordable broadband service is available to REC’s member-owner. The bonus of that program is it will serve as a gateway to the energy cost savings for member-owners as described by Wynn.

He said the goal is to have Roanoke Connect fully deployed over the next two to three years with over 4,550 broadband connections to go along with over 4,380 smart thermostats and in excess of 7,300 water heater element controls.

Those participating in the smart thermostats and water heater element program will save $12 monthly on their electric bill.

For more information on the programs, call REC at 252-209-2236 or visit www.roanokeelectric.com.