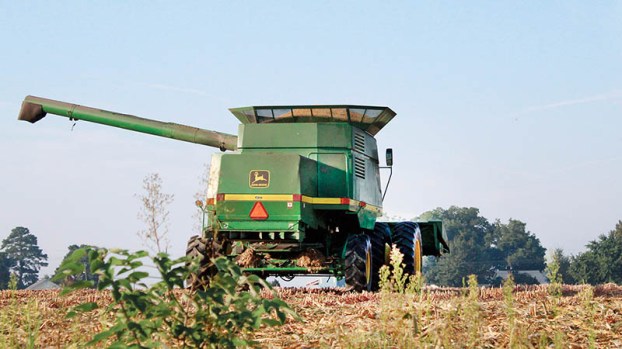 A combine rests in a partially picked corn field outside of Conway in Northampton County. Most farmers haven’t been able to do much work in the field lately because of heavy rains across the area in recent weeks. | Staff Photo by Holly Taylor

Mother Nature has dumped an abundant amount of rain on the Roanoke-Chowan region during the past few weeks. The extra natural irrigation has had an effect on some crops across the area, but reports indicate most farmers are still in pretty good shape for now while others may have more of a struggle ahead of them.

“It’s unusual to get this much rain and not have a named storm bring it,” said Craig Ellison, Director of Northampton County’s Cooperative Extension Office.

Effects from the rain have been similar across Northampton, Hertford, Bertie, and Gates counties. One of the biggest issues is soggy, muddy fields preventing farmers from getting certain work done in a timely manner.

“A lot of farmers have had to resort to utilizing planes and helicopters for spraying,” explained Josh Holland, Hertford County’s Extension Agent who specializes in field crops.

Many crops, he said, are sprayed this time of year to prevent diseases or insect infestations before harvest.

“They’ve had to use airplanes to do a tremendous amount of spraying that they normally do themselves. So that’s another added expense on a crop where the crop prices are deflated at this time anyway,” Smith explained.

“Tobacco farmers are having a really hard time getting through fields to get the tobacco harvest primed, to harvest the lower leaves on the plants, because it’s too wet to get the equipment through the field,” Holland added, mentioning the cost of doing that work by hand is both labor-intensive and time-consuming.

Despite the delay in typical field work this time of year, Billy Barrow, who serves as Director of Bertie’s Cooperative Extension Office, said he didn’t think any crop in particular had been devastated by the excessive rain.

“Most of our corn was already made,” Barrow said, explaining the recent rains wouldn’t have too much effect on corn yields.

Corn is typically harvested beginning in mid-to-late August and into September.

He also reported some areas of Bertie County had actually been very dry before persistent rain fell over a two-week period in late July and early August, so the additional moisture didn’t hurt the crops as much.

Holland said the extra rainfall in Hertford County has helped cotton plants increase the amount of blooms they produce, which hopefully will return a high-yield harvest in the fall.

It was a different story in Gates County where Smith said the outlook in some areas of the county was poor.

“Certain sections of the county have had tremendous negative impact because of the rain,” he acknowledged. “Corn that was planted somewhat early looks real good. The later corn did not do great. Rain has just kept it hammered down.”

Smith said he’s seen some of the peanut crop begin to turn a more yellowish color in the past two weeks because of the excessive amount of rain. The cotton crop too had been negatively affected in some places.

In Northampton County, Ellison said conditions during the planting season earlier in the year had more of an effect on their crops than the most recent rains did.

Planting season, he said, “sets the stage for the rest of the year.”

“We were challenged during our planting season trying to find windows where we could get our crop planted,” he continued.

But other than scattered places in the county where water may have drowned a few isolated parts of fields, Ellison said the crops have been holding up well. The focus has been more on checking to make sure crops like soybeans and peanuts aren’t affected by insects and diseases.

Over in Hertford County, Holland said they’d also increased scouting for diseases, “so we’re not losing yield at the end of the year at harvest.”

“I think the overall crop is going to be less than last year,” Smith said of Gates County crops, but also noted there’s still potential for the crops to adjust if the weather conditions improve going forward.

Ellison, Holland, and Barrow all agreed the results of the above average rainfall could have been a lot worse for their counties, but the crops there were generally doing well.

Ellison said he was a bit surprised by how the crops still maintained such a good green color because he expected soil deficiencies in areas like nitrogen and pot ash to start showing due to the rain. But he hasn’t seen much of a problem so far, and the sunshine between rainstorms has helped too.

“I think we’ve had enough sunlight in most areas of the county where we’ve had the big rains,” he said.

Having the rainfall spread out over a few weeks instead of a shorter amount of time was a positive as well.

“Most of that water has dissipated and we’re getting back more on schedule,” said Barrow. “Overall, we’ve fared pretty well given the amount of rain we’ve had.”

“It has been a blessing and a setback at the same time. I’d much rather have too much rain than not enough. We should come out successful,” Holland said optimistically, though he added a hope for hurricanes to stay far away as the season continues.

The county Cooperative Extension offices will continue to be a resource for farmers while they deal with impacts on the crops as harvest season moves closer.

The Northampton, Hertford, and Bertie Cooperative Extension offices will team up with the neighboring Halifax County office for an upcoming event where area farmers from those counties will have an opportunity to ask questions and learn more about things like crop variety yield data, disease control, and harvest techniques.

The “CHROME” Regional Ag Expo will be held on Wednesday, September 19 at the Peanut Belt Research Station in Lewiston-Woodville. Registration will begin at 8:30 a.m. that day. For more information, contact any of the participating Cooperative Extension offices.

RALEIGH – Over the course of his 30-year career with the North Carolina Department of Corrections, Daryl Williams always strived... read more