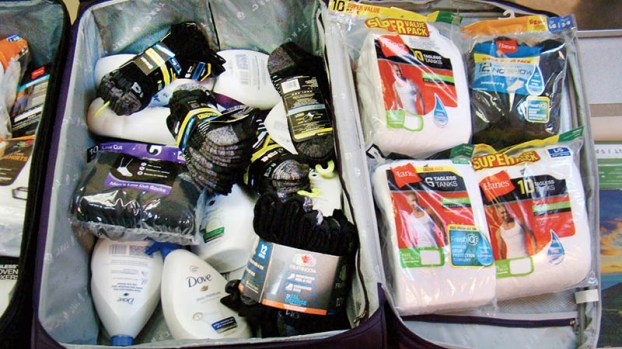 Shown here are items placed in a stolen suitcase that two suspects fled the Kitty Hawk Wal Mart with on Aug. 13. Calvin Alston and Luis Cruz, both of Edenton, were arrested a short time later after crashing a get-away vehicle while fleeing from law enforcement officers. | Contributed Photos

KITTY HAWK – One of the two men arrested here earlier this week after stealing several items from a Wal Mart is also wanted on a larceny charge by the Gates County Sheriff’s Office.

According to a post on the Facebook page of the Kitty Hawk Police Department, Calvin Bernard Alston and Luis Cruz, both of Edenton, led Kitty Hawk Police, the Currituck County Sheriff’s Office and the North Carolina Highway Patrol on a chase Monday after the subjects were seen fleeing Wal-Mart with over $1,000 in stolen merchandise.

The Facebook post alleges that both men loaded up two stolen suitcases with merchandise and took a 50-inch television as well from the Kitty Hawk Wal Mart.

The vehicular chase that began in Kitty Hawk ended in a soybean field around the 4300 block of Caratoke Highway in Coinjock. 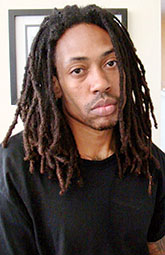 At the time of the arrest, Alston was allegedly driving on a revoked license.

Gates County Interim Sheriff Robert Jordan told the Roanoke-Chowan News-Herald that Alston was a suspect in a larceny case that occurred Aug. 8 at the Dollar General in Gatesville.

“A man, later identified as Calvin B. Alston, entered the store here in Gatesville just before closing time and loaded several items into a laundry basket,” Jordan said. “He pushed a (shopping) cart up to the door at which time he attempted to leave the store without paying for the items.”

Jordan continued by saying one of the store employees stopped Alston and a tussle ensued.

“He managed to get away with some of the items he stole,” Jordan stated.

Jordan said a later viewing of the store’s video cameras was used to identify the suspect as Alston.

He added that two weeks prior, a person matching Alston’s description entered the same Dollar General in Gatesville and stole some items.

“We’re still investigating the first larceny; once we are able to ascertain that Alston was indeed involved in that one, we will file additional felony charges against him,” Jordan said.

POWELLSVILLE – By a 4-1 vote, the North Carolina State Board of Education (SBE) has amended the original charter and... read more