ATLANTA, GA – The National Society of High School Scholars (NSHSS) announces that Brianna A. Howard of Ahoskie has been selected to become a member of the esteemed organization.

Howard, a rising senior at C.S. Brown High School – STEM, is the daughter of Daryl Tracy Howard and Margo Reynolds Howard of Ahoskie.

The announcement was made by NSHSS Founder and Chairman Claes Noble, senior member of the family that established the Nobel Prizes. 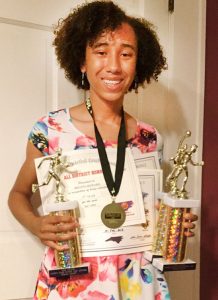 Brianna A. Howard is adding to her collection of academic and athletic honors with her recent inclusion into the National Society of High School Scholars.

“On behalf of NSHSS, I am honored to recognize the hard work, sacrifice, and commitment that Brianna has demonstrated to achieve this exceptional level of academic excellence,” said Nobel. “Brianna is now a member of a unique community of scholars – a community that represents our very best hope for the future.”

“We are proud to provide lifetime membership to young scholars to support their growth and development,” stated NSHSS President James W. Lewis. “We aim to help students like Brianna build on their academic success by connecting them with unique learning experiences and resources to help them prepare for college and meaningful careers.”

NSHSS members automatically become lifetime members at the time of their initial membership. At each step along the way – from high school, to college, to career – NSHSS connects outstanding young scholars with the resources they need t develop their strengths and pursue their passions.

For Howard, the NSHSS recognition comes on the heels of her recent inclusion into HonorSociety.org.

In addition to her academic achievements, Howard is also a gifted and award-winning student-athlete. In the sport of women’s basketball, Howard was named as a Northeastern Coastal Conference All-Conference performer for the 2017-18 season. She also earned a spot on the All-District Second Team as awarded by the North Carolina Basketball Coaches Association.

The North Carolina High School Athletic Association (NCHSAA) recognized Howard for outstanding achievement as an athlete and in the classroom for both basketball and women’s soccer for 2017-18.

During her sophomore season (2016-17), Howard was recognized by the NCHSAA for outstanding achievement in the sports of cross country, soccer, basketball, and track & field.

Hinton retires from Chowan after 20 years of service