“We saw some good things, and we saw some things we will work on and correct,” said Bears head coach Terrance Saxby. “We are also healthy going into our first game.

This Friday Hertford County is at Gates County in the season opener for both teams.

“Gates County is a fundamentally sound team that is not going to make mistakes,” continued Saxby. “They are big and physical and they possess a strong running game. They’re also led by a senior quarterback who understands their offense.” 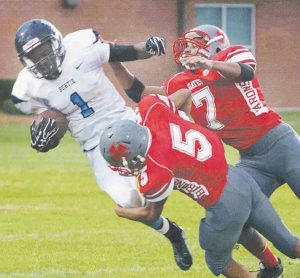 Unlike the Bears, the Red Barons had more than one scrimmage against other teams last week.

“We had good competition against other teams, and we were able to evaluate ourselves to see where we stand,” said Gates head coach Matt Biggy.

Bertie also had a couple of scrimmages last week: their intersquad Blue-White game on Wednesday and two nights later on the road against Ayden-Grifton.

“We did some things right, and some things we did wrong,” said Falcons head coach Grantley Mizelle. “We will be working on our mistakes and get better.”

This Friday, Williamston Riverside crosses the Roanoke River and heads up US-17 in the season opener for both teams. The Knights will be expecting a better result than the previous two years when they fell to Bertie twice in a row.

“Riverside has a good quarterback (Brandon Beach, who signed with Division II Gardner-Webb before the season started). And he is a three-year starter, plus a tremendous athlete,” added Mizelle. “He’s a big guy, and he can throw. Riverside is also very athletic.”

“Our defense played well, and we need improvement in our blocking,” said head coach George Privott.

This Friday, Roanoke Rapids is at Northampton County in the season opener for both teams. Last season’s opening weekend loss to the Yellow Jackets was the only regular season setback the Jaguars suffered up until the playoffs.

“Roanoke Rapids is balanced in rushing and in the passing game, and they have good athletes,” added Privott.

GASTON – They didn’t win, but they still won. That’s the verdict on Northampton County football in 2017. While the... read more