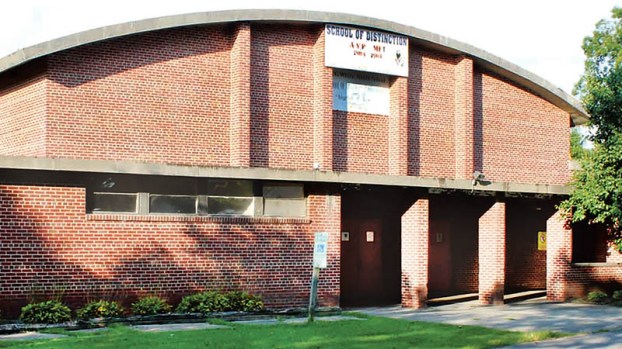 The former C.G. White Middle School will serve as the site for Three Rivers Academy when the charter school’s new school term begins on Aug. 27. | Staff Photo by Gene Motley

POWELLSVILLE – By a 4-1 vote, the North Carolina State Board of Education (SBE) has amended the original charter and granted Three Rivers Academy’s (formerly Heritage Collegiate Leadership Academy) request to relocate the school to Powellsville.

Pursuant to SBE policy CHTR-014 governing charter amendments, relocation outside a five-mile radius must receive Board approval prior to implementation.

Despite negotiations with the companies involved with the Windsor location, Global Education Resources, LLC (GER), parent group of Three Rivers, were not able to secure an agreement to maintain that location. School is scheduled to begin Aug. 27, and GER feared any further delay in resolving the site location would cause a delay in the opening date.

While the facility has quite a bit of age, GER toured the property and deemed it suitable for occupancy with some moderate renovations. The group then made their request for relocation to the SBE, which had to approve or deny the request in a call meeting, as the regular SBE meeting would not take place until Sept. 5.

Ten days later, on June 21, the SBE met to discuss the assumption of HCLA’s charter and voted that they accept the CSAB’s recommendation to permit assumption by a nonprofit corporation that would be formed with a new Board of Directors. The new Board would then partner with Global Education Resources as an education management organization (EMO) under conditions of:

On July 24, the Office of Charter Schools approved a name change for HCLA to Three Rivers Academy.

“Three Rivers Academy will continue to service students and their families in neighboring counties,” said James Montague, interim chairman of the Board of Directors. “The former school, from its Windsor location, served Washington, Hertford, Martin, and limited student participation from Pitt County. We are uniquely positioned to continue servicing Hertford, and Northampton and Gates counties, among others. These are all counties that do not have a charter school choice.”

Montague went on to say the new location would provide access to several amenities, including a football and softball field; both secure and adjacent to the school grounds eliminating any need for students or faculty to cross the street. The building also has high-speed internet and VOIP (Voice over Internet Protocol) capabilities.

Montague assumed the interim chairmanship of the Board of Directors following the resignation of former chairman Tuesday Sauer.

Sauer’s vacancy also necessitated the addition of a fifth member to the Board; and, at its Aug. 9 meeting, the Three Rivers Board voted to add Dr. Wanda Carr, a Greenville-based author, teacher, entrepreneur, and motivational speaker. Carr joins Windsor’s Carolyn Smithwick, Sylvia Brooks of Merry Hill, and Melissa Grimes, also of Greenville, along with Montague, who is based in Raleigh.

Meanwhile, still to be resolved is the Aug. 8 restraining order issued in an attempt by GER to recover furniture, equipment, computers, and school-related items including school buses, allegedly in possession by HCLA. The request to grant a permanent injunction against HCLA and founder, Dr. Kashi Bazemore, is slated to be heard in Bertie County Superior Court on Friday, Aug. 17.

Some of these items have been removed from the HCLA campus site off County Farm Road in Windsor, but the restraining order calls for their return.

“We had no choice,” GER group member Don McQueen, administrator of Torchlight Academy in Raleigh said last week. “We just want to get what’s necessary, according to the law that’s already in place, for the continuation of the school. These are things that would have been taken over by the state.”

“When you take property and put it on private property with no reasonable communication, then it really becomes a challenge,” McQueen continued. “I know Dr. Bazemore loves the school and she loves the children; I truly believe that and I don’t want to have a public discussion.”