Hinton retires from Chowan after 20 years of service

MURFREESBORO – John Hinton, Vice President for Human Resource and member of the senior staff (as well as the former Mayor of Murfreesboro), retired in May from Chowan University after 20 years of loyal service.

Hinton is originally from Portsmouth, VA. He graduated from Virginia Military Institute and went on to serve his country in the United States Army. Following his military service, he attended the Cincinnati School of Mortuary Science.

Hinton has since worked in various industries as an undertaker, bluegrass musician, disc-jockey, administrator for Settlers Life Insurance Company, mayor of Murfreesboro (for eight years), and servant leader of Chowan 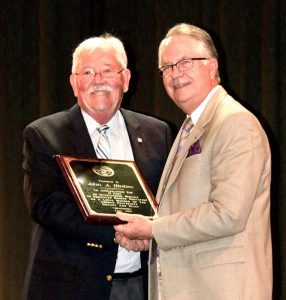 “This was the moment Dr. White knew, beyond a doubt, that no matter how difficult or unreasonable the task, he could count on John to more than fulfill his expectations,” Harrell noted.

Dr. White stated, “We had no money. No time. And no one. I said, ‘You’re it.’” Jokingly, he continued, “He turned pale. But we got through it. And I really appreciate him stepping forward during such a difficult time.”

Twenty years after joining the Chowan team, John Hinton has made a remarkable impact and is prepared for his well-earned retirement. He will remain in the town of Murfreesboro, and continue his involvement in the community.

MURFREESBORO, NC – Chowan University celebrated the academic and student organization accomplishments of students and faculty for the 2017-2018 academic... read more