HUNTSVILLE, AL – For the second time this summer, a former Chowan University men’s basketball player has left the professional ranks, but he leaves an outstanding career behind.

Suffolk native Quinton McDuffie officially announced his retirement in July, ending a five-year career that took him from eastern Asia to South America and back and forth across several continents.

While his leave-taking from the sport he’s played since childhood was bittersweet, McDuffie will now pursue another lifelong dream: working in law enforcement. 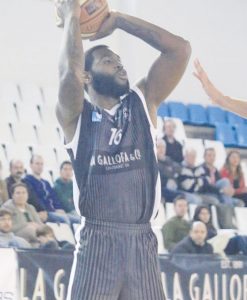 Former Chowan University basketball player Quinton McDuffie (in grey) played professionally across four continents in five years as a pro. In July he announced his athletic retirement to pursue his next career as a juvenile probation officer.

“I have so many fans from across the world as well as in the 252 area that ask me all the time if I am still playing ball,” McDuffie says with a laugh from his home in Huntsville, Alabama.

A 2013 Criminal Justice Major at Chowan, McDuffie went on to earn a Masters degree in Criminology from Troy University in Montgomery, AL.

“I want to show my family, friends, and fans all the things I’ve done thanks to the game of basketball,” he added. “I also hope to show them the next phase in my life as well.”

The Nansemond River High product began his college career with a one-year stint at NCAA Division III Virginia Wesleyan University in Virginia Beach in 2008-09, where he averaged 12.3 points per game and seven rebounds per game.

He left the Marlins after one season and moved south to Alabama State University in 2009-10, but never played due to the NCAA transfer rule. That’s when he landed back close to home at Chowan.

“After I played at CU, I moved to San Diego and signed to play in Moscow, Russia for the 2013-2014 season,” McDuffie recalled. “However, I was cut midway thru pre-season camp.”

But McDuffie’s time on the continent of Asia wasn’t over. He then signed to play in Ulan Bator, Mongolia for the rest of the season, and averaged 21.9 ppg, 9.2 rpg, and 4.2 assists per game, in 39 minutes on the floor each game night.

The 2016-2017 season found McDuffie crisscrossing the globe once again, playing in Sarajevo, Bosnia in the A-1 League of Euro basketball and averaging 16.4 ppg and 7.0 rpg.

However, McDuffie left the Bosnian team in December 2016, returning to South America where he signed to play basketball in Lima, Peru and had his best season as a pro, averaging 33.4 ppg and 11.5 rpg. Four times he earned “Player of the Game” in leading his team to the second-round of the LNB playoffs.

“I signed to play in LSB league Nicaragua for the 2018 season but was offered a position that I am currently working in,” McDuffie said. “I have now moved on from the game of basketball into my second career which is working in Law Enforcement as a Juvenile Detention Officer.”

While basketball dominated his life the past six years, McDuffie called achieving his Master’s degree in 2016; the accomplishment he is most proud of.

“I think athletes pursuing higher education degrees are very important because it provides you with a safety net and positions you for life after sports,” McDuffie said. “It was definitely difficult keeping up with basketball and school, but my mom, Lisa McDuffie, continued to encourage me to keep going further in life.”

Not only has McDuffie furthered his education, but he has also started his own management company, McDuffie Management and Consultant Group. He, along with a couple of investors, started the project to help players from smaller universities seek opportunities beyond the game.

“We want to help players – NCAA Division-I mid-majors, NCAA DII, DIII and NAIA – who don’t get the same type of opportunities as the bigger NCAA schools,” McDuffie said. “The goal is to help as many guys as possible live out their dreams the same way that I have.”

McDuffie says while looking ahead to new pursuits, he looks back on the last half-decade with no regrets.

“Honestly, it’s been a blessing for me,” McDuffie said of his playing career. “I’ve enjoyed every moment, from the traveling, sightseeing, teammates, basketball, etc., I just tried to soak it all in and learn from everything around me. This just helps close a chapter to what isn’t an ending in my life, but a beginning. I know that I am bigger than basketball.”