GASTON – They didn’t win, but they still won.

That’s the verdict on Northampton County football in 2017. While the Jaguars were knocked out in the third round of the state playoffs, they still managed quite a few milestones on their ‘dream’ season.

After losing their season opener, they then reeled off 11 straight wins – ten in a row in the regular season, sweeping the Tar-Roanoke 1A Conference. Those wins included one over perennial power Plymouth during the regular campaign, and a victory over 2A Bertie. 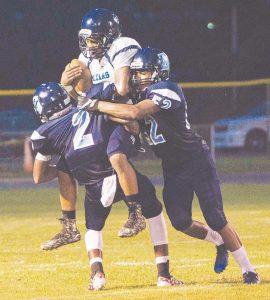 Northampton County High quarterback Teyvon Shoulders (in white) hauls in a pass on an option play. Shoulders will be looking to complete his senior season leading the Jaguars to another conference championship. | AA Imaging / Andre Alfred

It was only in the playoff rematch against Plymouth that the Jags fell for the first time since August, in the 1A Eastern semi-finals, giving them a season-ending mark of 11-2.

One of the key returnees for head coach George Privott is two-year starting quarterback Teyvon Shoulders, who hopes to close out his senior year with a winning season.

Anchoring the Jaguars’ offensive line will be senior center Jaylin Grant, and beside him will be Rhajeek Gorham, another senior, at guard.

“Our quarterback and two running backs return from last year,” said Privott. “And this offensive line is the best looking group I’ve ever had.”

“On defense we lost a couple of players, but mostly a solid group returns,” added Privott.

Northampton opens at home against the only blemish on their record from last season, the Roanoke Rapids Yellow Jackets, on Aug. 17. That’s followed up by another home date, this one with the Bertie Falcons, on Aug. 24; and they close out the three-game home stand by hosting Warren County on Aug. 31.

The Jags open September on the 7th in Williamston against Riverside, then play their final non-conference game against Washington County (consolidated Plymouth and Creswell) on Sept. 14.

Sept. 21 the Jags open conference play at home against Rocky Mount Prep, followed by another home date Sept. 28 against North Edgecombe. Two road dates back-to-back follow beginning Oct. 5 at Southeast Halifax and then on Oct. 12 at Northwest Halifax. After KIPP Pride at home on Oct. 19, they close out the regular season on the road at Weldon on Nov. 2.

“We have a tough non-conference schedule as we play Roanoke Rapids, Bertie, and Warren County,” said Privott. These are all 2A teams that should get us ready for conference play.”

“Our conference will be a challenge every Friday night since four teams have new head coaches which will give us something new to prepare for,” added Privott.

“We are the defending conference champs, so everybody will be after us,” the coach concluded. “We need to stay healthy, and our goal is to win the conference championship and go farther in the state playoffs than we did a season ago.”