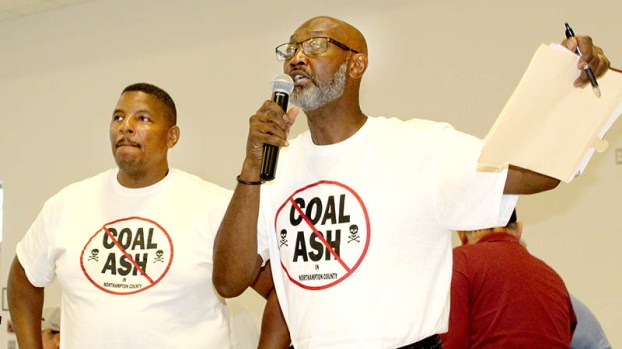 Tony Burnette (left) and Al Kwasikpui address the crowd after Wednesday’s Planning Board meeting to encourage them to continue the fight against coal ash in Northampton County. | Photo by Holly Taylor

JACKSON – They came with t-shirts and hats and signs of all sizes, all bearing the same message: no coal ash.

They left with that message still intact and celebrating a decision made by the Northampton County Planning Board not to rezone property near Seaboard where plans were in the works to construct a coal ash storage/recycling facility.

As previously reported by the News Herald, Vista Green LLC resubmitted its request to rezone an 852-acre property near Seaboard from Agricultural-Residential (AR) to Heavy Industrial (HI). The Northampton Planning Board met here Wednesday night to hear arguments for and against the proposal.

“The Planning Board’s recommendation is just that: a recommendation. The Board of Commissioners are free to make a final decision on the rezoning request regardless of the recommendation made by this board,” stated Planning Board member Albert Vann as he explained the procedure to the large crowd who gathered at the Wellness Center in Jackson to attend the meeting.

The parcel of land in question is currently zoned Agricultural-Residential, which according to the county ordinance means “protection of the environment, preservation of prime farmland, and the continuation of rural lifestyles are goals this district seeks to attain.” Permitted uses on AR districts include farms, cemeteries, churches, single or two-family dwellings, and schools.

In contrast, a Heavy Industrial district “is to establish and preserve areas for heavy industrial and related uses and is designed to accommodate all but the most objectional industries” according to the county zoning ordinance. Permitted HI uses include multiple types of manufacturing facilities, truck assembly facilities, food processing facilities, cement mixing plants, sheet metal fabrication, water/wastewater treatment facilities, and more.

If the rezoning request were to be approved, Vista Green would then have to file another application for a Special Use Permit in order to construct a facility that would dispose and recycle coal combustion residuals (CCRs), more commonly known as coal ash. That was their originally stated intent when they initially filed for rezoning over a year ago before withdrawing their application.

Before presentations got underway, Roger Waldon, a planning consultant hired by Northampton County, gave a brief overview of what factors the Planning Board should consider when making its recommendation. He stressed especially to consider whether or not the proposed rezoning would be consistent with the county’s comprehensive land use plan.

Both sides had 30 minutes each to argue their position on the rezoning proposal. Representatives from Vista Green spoke first, with many emphasizing that coal ash shouldn’t be considered in the decision for rezoning.

“The property can go back to growing trees for the next 30 years, that’s what it had been doing,” he said. “But growing trees does not increase the tax base. It does not create jobs.”

Terrell listed multiple positive factors which make the site suitable for industry. The site contains nearby access to Highway 186, two miles of direct access to CSX rail line, and easy access to energy through Dominion Energy. There are also plenty of natural buffers around the site, he said, to reduce visibility from neighbors and passing traffic.

Other support for the rezoning focused on emphasizing the need for economic development and more jobs in Northampton County.

“How many young people around my age, young millennials, have a reason to come back home to Northampton County after they matriculate through high school and college,” Mann posed to the crowd, adding that young people wanted jobs where they can support themselves and their families.

Mann continued, explaining, “if our original purpose is not accepted, then we at least want to be able to develop various industries, create jobs, and build a tax base within Northampton County.”

“Seaboard could be a thriving community again,” added Beasley when he addressed the crowd. “We ask you to give us a chance to bring you jobs and investment and the opportunity for positive change in people’s lives. To do that, you need industry. And industry needs to have a zoning district. That’s what we’re asking for.”

Beasley also noted the benefits of the 850-plus acre site, saying, “we’ve been completely transparent that we chose this remote site because of its size and access to rail to create an environmental industry by receiving and recycling nonhazardous coal ash.”

Powell’s assertion, however, that Northampton County’s lack of jobs were the cause of the increase in local crime gained some disapproving noise from the crowd.

With Vista Green’s time up, people opposed to the rezoning had 30 minutes to present their point of view. A total of 12 people spoke, and many of those focused their remarks on the health dangers of coal ash.

Kwasikpui listed a number of medical issues he claimed are caused by exposure to coal ash, to include cancer, blood disorders, neurological problems, respiratory problems, and more. He said his group had interviewed former coal ash workers who now suffer severe medical issues. He argued that young people who may benefit from jobs at the proposed facility would not be able to stay long in that line of work due to the health hazards.

Jerry McDaniel, who gave a glass jar of coal ash to the Planning Board to examine, said for years the locals have been handling coal ash “like street outlaws.”

Belinda Joyner and Floyd Joyner both claimed “my community is killing me” in reference to the negative health effects of coal ash. David Edge, too, said simply, “coal ash kills.”

Darlene Brooks, a former chemist, explained, “I stepped down from the chemistry lab because I don’t like being exposed to harmful chemicals and toxins. I’m definitely against coal ash. I don’t want to breathe this in.”

“Will consumers decide they do not want to purchase crops grown near a coal ash facility” questioned Debbie Davis, co-chair of the Northampton County Citizens Against Coal Ash group.

Pointing to a map of Northampton County on the wall, James Lane explained how water sources would be affected if there was a containment problem with coal ash. It would be difficult to clean up the coal ash, he said, if it contaminated the ground and water.

The fact that the Beasley family is from Colerain in Bertie County was something many other speakers pointed out in their presentations.

“Why Northampton County? Because we are money poor and land rich,” Kwasikpui said, noting that Bertie County is also designated a “Tier One” county, meaning they too are in need of economic development.

“Don’t offer us something that you don’t want for yourself,” B. Joyner stated.

Along with emphasizing the health concerns, Annie Helton claimed the coal ash facility would substantially drive down property values in the area. She spoke alongside Lynbergh Mitchell about how they tried to get investors to come to Northampton County, but were scared away while the possibility of coal ash was still on the table.

Ozell Thomas noted all the permitted uses of a heavy industry site, and then asked “would you want that in your backyard?”

Tony Burnette, president of Northampton’s chapter of the NAACP, said, “one thing I continue to hear is that our population is 65 and getting older. Does that give them the right to dump coal ash on us? No it doesn’t.”

“I never thought I’d see a time where whites and blacks come together, but this is a people’s issue,” Burnette added.

“Bringing in heavy industry does not complement the surrounding landscape. If you look at that map, it’s all agricultural,” Davis pointed out, noting her husband and his family have for generations farmed the land on all sides of the Vista Green property.

“Rezoning the property from agriculture to heavy industrial is not reasonable and is not in the public interest of the citizens of Northampton County,” said Kwasikpui before asking the audience in attendance to stand up if they were against coal ash.

Much of the large crowd in attendance stood up in response and cheered.

Once both sides had presented their arguments, Planning Board member Tina Watson motioned to recommend to the Board of Commissioners to deny the rezoning, leaving the parcel of land as Agricultural-Residential.

Watson stated the motion to deny was “because [the rezoning] is inconsistent with the comprehensive land use plan for Northampton County and is not reasonable or in the public interest.”

The motion was seconded by both Veronica Lofton and Margaret Burgwyn. There was no opposition voiced, and the motion was unanimously approved.

“The county commissioners have the final say,” Vann reminded the crowd as he adjourned the meeting.

WINTON – By unanimous vote, the Hertford County Board of Commissioner approved a rezoning request at their regularly scheduled meeting... read more