GATESVILLE – After opening their non-conference schedule with an impressive 4-2 record – including wins over 3A Oxford Webb and 2A Bertie – Gates County stumbled a bit in Albemarle 1A Conference play before ending the year with a record of 6-6, including a first-round playoff loss to fellow conference member, Manteo.

This year the Red Barons return senior quarterback and three-year starter Jawan Riddick. He will have some veteran company in the backfield in leading rusher from 2017, and fellow senior Ron Olsen. A couple more seniors will be the Gates wide receivers in Tyrell Holley and Jordan Robinson.

“We return all of our skill guys, but we graduated all of our offensive linemen,” lamented head coach Matt Biggy, who will begin his 12th season at the helm. 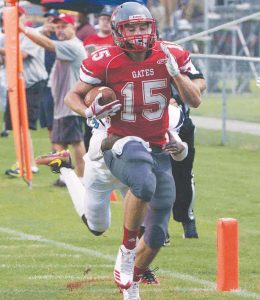 Defensively, Gates County will be led by a trio of juniors: Jayden Bond at linebacker, Daniel Holland on the defensive line, and Dyrion Bryant at defensive back.

“The defense is working on getting better with more returnees from last year,” noted Biggy.

Gates County opens their season Aug. 17 (Friday) with a home date against Hertford County, and will look to break a three-year losing streak of home openers against the Bears.

August 24, Gates County is in Oxford for their first road game versus J.F. Webb, and they’ll close out the month on the 31st, also on the road in Windsor against Bertie.

The ‘Barons open September at home on the 7th against Chocowinity Southside before going back on the road on the 14th to face Southeast Halifax. Sept. 21 finds Gates County hosting 2A Pasquotank, and they will close the month with an open date on Sept. 28.

Conference play begins Oct. 5 at home against Manteo before a pair of road trips: Oct. 12 at Perquimans and Oct. 19 at Edenton Holmes. Washington County (the consolidated Plymouth and Creswell) High School pays its first visit to Gates County on Oct. 26 before the Red Barons end the regular season with a Nov. 2 home date against Camden County.

“We have a very tough non-conference schedule,” said Biggy. “These are all good and very competitive teams, and they will prepare us for conference play.”

“Our conference is very good this year. It is from top to bottom one of the best 1A conferences in the state. Edenton won it last year and are the team to beat again this year. Washington County, Manteo, and Perquimans are also strong; and remember Edenton and Plymouth lost in the 1AA Finals in back-to-back years (2016 and 2017),” Biggy noted.

“Our goal for this year is to get better each week and at the end of the year compete for the conference title,” the coach concluded.

Tangled up in Blue