CONWAY – A Conway man stands accused of robbing a residence in his own neighborhood.

Brooks was also charged with injury to real property, a misdemeanor. Chief Duke said that charge was levied due to damages caused to three windows at the residence that Brooks allegedly robbed. Entry was gained through one of the windows, Duke said.

Once inside, Brooks is alleged to have stolen several items, which the homeowner valued at $525. 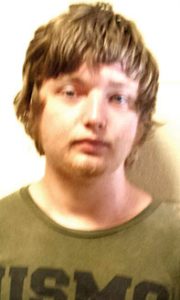 “The crime occurred on July 29,” Duke said. “No one was at the residence at that time. The homeowner reported to crime the next day (Monday, July 30). That initial report was to the Northampton Sheriff’s Office who, in turn, handed it over to me to investigate.”

Duke said a key piece of evidence led him to target Brooks.

“He was seen on a surveillance camera at the victim’s residence,” Duke noted. “Once his identity was determined, arrest warrants were drawn, but it wasn’t until Tuesday of this week that we were able to apprehend him.”

On the above listed charges, Brooks was jailed under a $35,000 bond. He is scheduled to make his first court appearance Aug. 9 for those charges.

Meanwhile, Brooks, who is no stranger to local law enforcement, is scheduled in court to answer charges for other recent alleged crimes.

He has an Aug. 23 court date in Jackson on charges filed by the Northampton County Sheriff’s Office for felony possession of stolen goods, and for misdemeanor first degree trespassing.

His arrest record dates back to 2014 where he was twice charged for communicating threats in Northampton County.

In all of those previous cases, Brooks was given suspended sentences, placed on probation, and ordered to perform community service.