Bob was born on October 7, 1922 to Hiram Cox Hill, Sr. and Martha Elizabeth “Bess” Freeman in Allendale, SC. When Bob was eleven years old, the Hill family moved to Scotland Neck, NC. In the ninth grade, Bob attended Wake Forest High School while living with his brother, Hiram, who was attending college. He then attended Murfreesboro High School for the tenth grade as his parents had moved to Murfreesboro at this time. During his eleventh grade year, he returned to Scotland Neck and graduated while living with Miss Rhetta Johnson.

Bob attended North Carolina State College earning a Bachelor of Science degree in Aeronautical Engineering, and was a member of the Lambda Chi Alpha Fraternity. He was enrolled in the R.O.T.C. program while there. After graduation, Bob went on active duty as an Ensign in the Navy during WWII. He served in the South Pacific with the First Marine Division in three invasions. He also served temporary duty on destroyers and a seaplane tender.

Returning to the US after he war, he was involved in experimental flight operations, and then returned to St. Simmons Island, GA as an instructor until he was released from service as a Lieutenant Senior Grade. 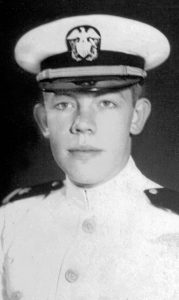 Bob returned to Murfreesboro, married, and began operating, along with his father, a business known as Moonlight Manufacturing Company. This business later grew into a construction firm involving building contracting under the name, Hill Enterprises. His brother, Hiram, later joined them. His two sons, upon graduation from college, also joined the family business. In later years, the company evolved into a building supply firm, and in 1978, was sold to Lowe’s.

While living in Murfreesboro and raising a family, he participated in numerous clubs and organizations. He felt strongly about volunteering in the community and enjoyed public service.

Bob was active in various civic clubs. He served as President of the Rotary Club, Chamber of Commerce, and the Murfreesboro Historical Association. He served as Trustee and Chairman of the Board of the Roanoke Chowan Hospital, and as Chairman of the Executive Committee of the Board of Trustees of Chowan University. In 1947, he was one of a group of six men who dedicated themselves to the reopening of Chowan after the college closed during World War II.

Bob served as a Hertford County Commissioner for two terms and was involved with various other committees to help promote Murfreesboro and local county industries.

Involvement in his church, Murfreesboro Baptist, was a priority for Bob. He was a Sunday School Superintendent, Deacon, and active in the design and construction of various improvements for the church.

Bob took special pride in Murfreesboro’s historic renovation efforts and was instrumental in the acquisition and restoration of over fifteen historic properties and creation of the Murfreesboro Historic District.

Besides his parents, Bob was preceded in death by his wife, Josie Lassiter Hill; his brother, Hiram Cox Hill, Jr.; his stepmother, Annie G. Hill; and a stepsister, Barbara A. Bryant.

He is survived by his half sister, Patty H. Joyner (Clifton) of Winton, NC; and a stepsister, Joyce Chabot (John) of Hagerstown, MD. He is also, survived by two sons, Bob F. Hill, Jr. (JoAnn) of Seneca, SC and Lloyd L. Hill (Tommie) of Murfreesboro; and a daughter, Catherine H. Jenkins (Johnny) of Murfreesboro. To his many grandchildren and great grandchildren, he was lovingly known as “Grandpap”.

A Memorial Service will be held at Murfreesboro Baptist Church on Thursday, August 9, 2018 at 11:00 a.m. Rev. Lane Bass will lead the service.

A visitation and lunch will be held at the home of Tommie and Lloyd Hill at 7 Quail Hollow Road, Murfreesboro, immediately following the service.