MURFREESBORO – Willard Davis Futrell, age 82 of Murfreesboro, passed away on August 4, 2018 at the Rich Square Manor in Rich Square, NC.

He was born on March 19, 1936 to Fitzhugh and Learlie Futrell of Northampton County, NC. Willard attended Chowan College and was the head resident at West Hall. He had tremendous love for Northampton County. He was married to Peggy Britt in 1957 and they enjoyed sixty-two years of marriage.

Willard served his country in both the Air Force and Navy for thirty-three years. He achieved the rank Master Chief Petty Officer for US Navy, retiring in 1987. He is honored in the United States Navy Memorial in Washington DC and the Veterans Memorial in Conway. 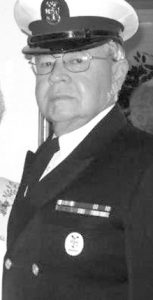 The family will receive friends on Wednesday, August 8, 2018 from 6:00-7:00 pm at Garrett-Sykes Memorial Chapel in Murfreesboro.

Funeral services will be held on Thursday, August 9, 2018 at 2:00 pm at the Ashley’s Grove Baptist Church in Conway, NC with the Rev. David Ross officiating. Interment will follow at Riverside Cemetery in Murfreesboro.

Memorial contributions may be made directly to the Alzheimer’s Foundation of America, 322 8th Ave, Seventh Floor, New York, NY 10001 or online by visiting www.tmcfunding.com/search then type Willard Futrell.

Garrett-Sykes Memorial Chapel is handling the arrangements for the Futrell family and online condolences can be directed to the family by visiting www.garrettsykesfs.com.