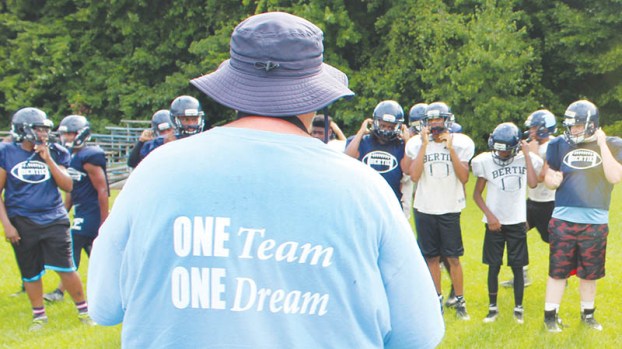 Tangled up in Blue

WINDSOR – The key is creativity.

That’s what third-year Bertie High School football coach Grantley Mizelle feels he can get from his squad this upcoming football season.

“In the old days we’d line up in the Power-I and run it down your throat,” Mizelle said. “But we’re not 260-285 (pounds) to push people around anymore like we used to. But the good thing is we’ve got a lot of guys back.”

The Falcons stumbled to a 4-8 record last year giving Mizelle an overall 9-15 mark during his tenure. Still, Bertie made progress a year ago – winning three-of-four at midseason and at one point leading the 2A Northeastern Coastal Conference race – good enough to secure their second straight year in the post-season with a playoff berth.

“We’ve got a few tweaks and wrinkles to what people are used to seeing from us in the past,” Mizelle continued.

One position he won’t have to replace is at quarterback where six-foot, 200-pound junior Isaiah Williams returns for his second season starting under center. The first time in his head coaching career Mizelle has had a veteran signal-caller.

Williams will have some weapons when the Falcons unveil their intermediate passing game. Mizelle touts receiver Jamari White (636 receiving yards, 4 TD’s) as one of the best in the conference and on the other side will be newcomer Darius Rascoe (6’ 2”, `190).

“He really shined on defense in his first year of football last year, so this year we’re asking him to go both ways,” said Mizelle.

Senior Chris Cooper will be the premier back in the backfield, but Demarian Epps and Jerome Gainer will add depth at the running position. “We need them to play some big minutes,” Mizelle stated. “Everybody’s got to contribute because we’re going to have to play Iron Man football like in the 70’s and 80’s. They did it then, we can do it now.”

“Defensively, we return six starters, but we lost our two defensive ends to graduation, but freshman D.J. Vinson is a tank and if we get him in shape he can really move, so you may see us in a bunch of different looks,” noted Mizelle.”We’ve got to adjust to what our players can do; maybe not traditional Bertie football, but some things we’ve been working on since May.”

Oscar Jones, Emonte Mebane, and maybe Williams or Cooper going both ways is the Falcon linebacking corps, while Earnest Strawther and Rascoe will anchor the defensive backfield.

“The injury bug gets us (then) we may be in trouble,” cautions Mizelle. “We’re really, really young, but I think the conference is vulnerable, and we’re catching everybody at a really good time.”

Bertie will hold their Blue-White intrasquad scrimmage tomorrow (Wed.) at Roy Bond Stadium on campus. Then on Friday (Aug. 10) they’ll see someone new in their second scrimmage at Ayden-Grifton.

“We’ve got a lot of leadership and a lot of big-time players on this team, so we’re excited about what we have and the future of Bertie football,” he concluded.

AHOSKIE – Post 102 American Legion baseball hosted a banquet for the players, parents, legionnaires, and helpers of the team... read more