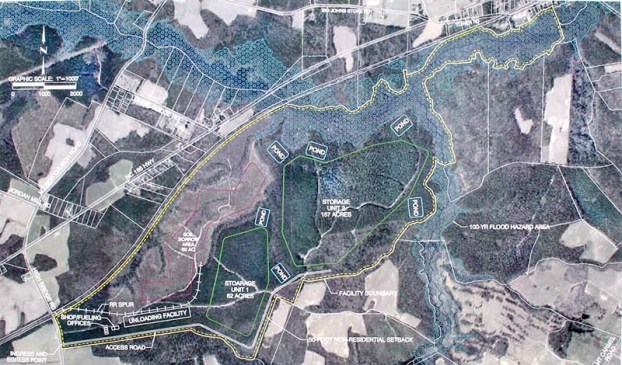 Shown is a map of the proposed High Bridge Park project, located off NC 186 between Seaboard and Margarettsville. Vista Green, a private firm, has applied for a special use permit to develop the 804-acre tract into a facility to store and recycle coal ash.

JACKSON – Vista Green, LLC has applied to rezone a remote Northampton County site to HI (heavy industrial) so that, if approved, the company apply for a special use permit for a facility near Seaboard capable of disposing and recycling coal combustion residuals (CCRs), commonly known as coal ash.

The Northampton County Planning and Zoning Board has scheduled a meeting at 6 p.m. tomorrow (Wednesday) at the Cultural and Wellness Center near Jackson for consideration of Vista Green’s application. That meeting is open to the public.

Since first making their intentions known in January of 2017, Vista Green desires to construct, by way of a special use permit, two landfills for the purpose of storing CCR material, a byproduct of the coal combustion process. Each landfill would be lined with a thick, durable membrane of high density polyethylene that will be placed on top of a two-foot layer of compacted clay soil. Those types of barriers are designed to prevent any contaminants from migrating into groundwater.

“The first step in this process is to have the property rezoned as heavy industrial,” said C. Wood Beasley III of Colerain, one of the partners in Vista Green. “If the county agrees to the rezoning, then we have to come back with what we think is the best use for that site. We believe, of course, that the best use is our coal ash storage and recycling facility.

“If the county believes that coal ash storage is not the best use of that particular parcel, then we’re back at square one, but at least we have the heavy industrial zone….that’s our primary focus at this point,” Beasley added. “There are other types of industries that could be sited there. At this point it’s all about economic development for a county in great need of economic development, to include putting people to work.”

Still, Beasley and his partners believe that the rewards of building a coal ash facility at the site far outweigh any risks.

“The technology is there, and will be used at our planned facility, to protect the environment and preserve the way of life currently enjoyed by the residents living near our property,” Beasley noted. “I can’t stress enough that the risks, if any, are extremely manageable through the stringent regulations placed on CCR sites by state and federal agencies.”

If the requests for rezoning and a special use permit are approved, the next step in the process is for Vista Green to obtain a franchise from the county for the operation of a sanitary landfill. In turn, the company pays the county a host fee of $1 per ton for all tons received at the facility.

That franchise must be obtained prior to Vista Green applying for operational permits from the North Carolina Department of Environmental Quality.

Additionally, Vista Green has promised to establish a Community Fund where 80 cents per ton (up to 1 million tons) will be collected annually and spent equally within the county’s five commissioner districts for charitable, educational, philanthropic, religious or other non-profit purposes. The Community Fund will be managed and operated entirely by citizens appointed by county officials. That fund will also receive 12 cents per ton of CCR material used for recycling purposes.

Two other promises made by Vista Green include a donation of property, located at 101 East Jefferson Street in Jackson currently owned by Eastern Fuels, Inc. (valued at $123,220), to the county; and the establishment of an annual STEM Scholarship ($3,000 each year) to a rising college/university freshman who resides in the county commissioner’s district where the facility will be located.

Beasley added that while these incentives are attractive, the real “winners” (his words) are those gaining employment at the facility.

“First there are the construction jobs, but I’m looking long-term here and we’ll need roughly 75 employees to operate the landfill and then there is the possibility of twice that many workers needed on the recycling end,” Beasley stated. “The recycling part of the equation is really the most attractive part as there are a wide range of useable products that can be made from CCR.

“Again, I need to stress that what we’re seeking on Wednesday is the start of this process, the rezoning of the land. If things fall into place after that, then we can talk in greater detail about the overall economic impact that this facility can have on the future of Northampton County, to include jobs and expanding the county’s tax base,” Beasley concluded.