AHOSKIE – NC Department of Transportation crews based out of the Division One office in Ahoskie are in the process of repairing two local roads that suffered damage due to washouts from heavy rainfall that has occurred over the past two weeks.

As of now, the Perdue Road near the Feed Mill plant at Cofield and Harrell’s Siding Road near Roxobel are closed to thru traffic until further notice.

Terry said the most recent washout occurred earlier this week on Harrell’s Siding Road, between its intersection with Horace Vick Road and Roxobel. Barricades blocking that section of the road were put in place on Wednesday. 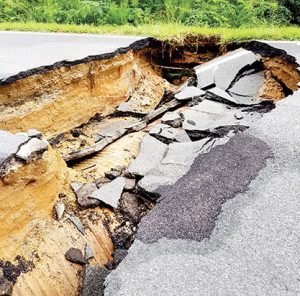 A portion of Harrell’s Siding Road was washed out earlier this week near Roxobel. | Photo by Martha Parker

“We’ve got the permit and materials in place to make the repairs there; all we’re waiting on now is to have the area checked for underground utilities (water lines, phone lines, etc.) before we can get started,” Terry said on Friday morning.

Terry added that if everything falls in place, his crews can hopefully begin making those repairs by the middle of next week.

“We do have an excavator tied up on another project right now,” he said. “Hopefully we can free that up next week and move it to the Harrell’s Siding Road project. If not, it may be the next Monday (Aug. 13) before we can start-up there.”

Terry said the repairs will take approximately two days and may include increasing the size of the current drainage pipe (71-inch).

Meanwhile, Terry and his crews are waiting on the Town of Cofield to move a water line in the area of the washout on Perdue Road. That washout, which occurred July 23, is approximately 100 yards from the area where the trucks enter the Perdue Feed Mill.

“The pipe under the road there separated and affected the edge of the road,” Terry said. “It also exposed a water line belonging to the town and they are working with a contractor to make adjustments to that water line before we can go in and make our repairs.”

He added there is no definitive timetable of when that work will be completed.

MURFREESBORO – In the past year since Revelle Realty has started hosting art exhibits in their office, they’ve displayed a... read more