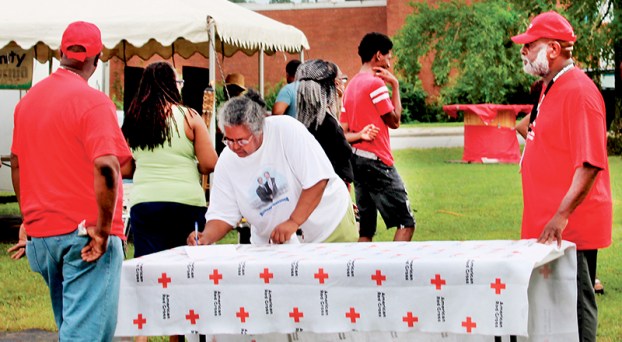 A resident of the Rich Square’s Creecy neighborhood signs up for a free smoke detector at the American Red Cross’s information table at Saturday’s community event. Staff Photo by Holly Taylor

RICH SQUARE – It all started with a basket of fruit.

John Parker had an idea to bring his community, the Creecy neighborhood in Rich Square, together and get to know everyone better. With the help of his wife and a few neighbors, Parker started first by delivering fruit baskets door to door, then forming a community board, and then planning and organizing a community cookout.

That cookout was held last Saturday afternoon across the road from the old Rich Square Creecy School. He and his fellow Creecy Community board members hope it will be the first of many to come.

“We’re trying to bring the community in one place,” Parker said. “We can eat, fellowship, get to know each other, mingle. That’s the whole purpose.”

Tents and tables were set up along the open grassy area. Several people worked to prepare a variety of food, including barbecue, chicken, hotdogs, hamburgers, Brunswick stew, and much more. DJ Walter Edmonds provided music. Residents of Roberts Road and Drew Avenue, the two main roads which make up the Creecy community, mingled together to catch up and chat.

“Once you get to know your neighbors, you’ll become closer,” said Gwendolyn Futrell, one of the Creecy Community board members, as she took a brief break from setting up the food tent.

Futrell said she’s lived in Rich Square her whole life, and she’d love to see more neighborhoods coming together “so the whole town of Rich Square will become a better place to live and a better place for other people to come in and visit.”

Charles Eason, who also serves as a town commissioner in Rich Square, was one of the people initially helping pass out fruit with Parker and fellow neighbor David Daughtry.

“We wanted to really know our neighbors,” Eason explained, noting they especially wanted to emphasize the importance of helping and supporting people when in need.

In addition to bringing people together, the other theme of the community cookout was “safety and wellbeing.” Special guests were invited to speak and provide information on the topic.

American Red Cross representative Mary Faison was one of the people passing out informational pamphlets during the event.

“We have free literature that we’re giving out to people in reference to fire safety and hurricane preparedness,” she explained. “We want to make sure people are prepared the best they can be.”

Disasters, she said, can happen to anyone, so it’s important to spread information and awareness.

The Red Cross’s main focus on Saturday, however, was getting working smoke detectors out to every home in the neighborhood. People who needed one could sign up for free to receive one.

Other guests included representatives from the Northampton Sheriff’s office, Eastside EMS, the Rich Square Fire Department, and many more. Rich Square’s mayor and the town police chief were both invited but unable to attend Saturday’s event.

“When someone takes your hard-earned money, promises you one thing and then delivers nothing, that is a scam,” the sheriff explained.

He detailed popular scams such as the ‘grandfather scam’ where someone calls and asks for money to help a relative who lives out of town or out of state. Smith urged people not to send money in response to these calls. If you’re worried about a relative, he said the first thing to do instead is to call law enforcement where they live and check on them.

Sheriff Smith also cautioned people about IRS scams, which call people over the phone to say they owe money to the government. Legitimate contact from the IRS will only come through the mail.

“If you answer [one of these calls], hang up on them,” he said. “The IRS will never contact us by telephone.”

The sheriff’s other safety tips included reminders to always lock your house and car doors, install a home security system if affordable, and not to advertise when travelling out of town until you return.

“Please be careful, be mindful,” he concluded.

Nelson Laureano of Eastside EMS spoke about the importance of receiving good medical care, and he reminded everyone that they will always provide service when called.

“We are available to you 24 hours a day, seven days a week, nonstop. We don’t take breaks. We work for you all year long,” he explained.

Phillip Ricks, a 48-year veteran of the Rich Square Fire Department, talked about fire prevention as well as what other services the volunteer department offers.

Ricks reported the number of house fires has been very low so far this year, which he believed was due to an increased awareness of fire safety. He urged people to pay attention to smoke detectors and change batteries when needed.

“Get down on the floor and crawl,” Ricks reminded the audience about what to do if a fire should break out, noting that most deaths from fires are caused by smoke inhalation rather than burns.

The Rich Square Fire Department, he said, also serves as first responders to 911 calls. The department recently purchased two “Jaws of Life” devices which will help cut people out of wrecked vehicles without having to wait for other county departments to respond, saving time and hopefully more lives.

“We appreciate everything y’all do for us. We can handle all the donations you want to give,” Ricks concluded, noting that the volunteer department continues to run based on the support of the community.

Despite the chance of thunderstorms, people of all ages came out to the community cookout to have a good time.

Parker summed it up best by talking about the importance of looking out for each other and providing support to your fellow neighbors.

WINTON – The individual responsible for shooting two women before taking his own life here this past weekend has been... read more