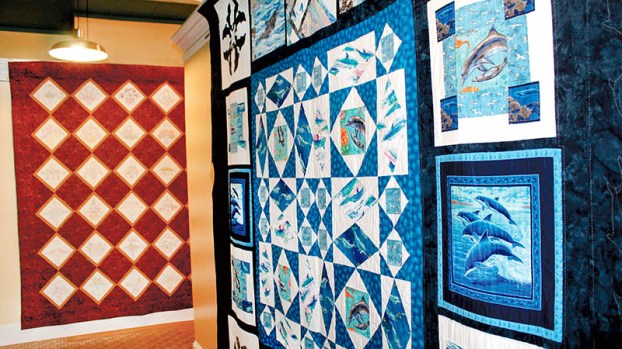 The blue quilt entitled “Dolphins in a storm” by Jan Thomas is one of many on display at Revelle Realty as part of the business’s latest art show. Thomas spent years hand-quilting the piece which won awards in 2008. | Staff Photos by Holly Taylor

MURFREESBORO – In the past year since Revelle Realty has started hosting art exhibits in their office, they’ve displayed a variety of paintings, photography, and pottery. The most recent show, however, features a different kind of artwork: quilting and basket weaving.

“Over & Under” brings together the quilt work of Jan Thomas and the basket weaving of Jean Eason and Becky Williams. An opening reception was held here on July 25 for visitors to enjoy the work and talk with the artists.

Thomas, who’s been doing sewing and embroidery since she was a child, said she got interested in quilting about 25 years ago, learning first from classes at Roanoke-Chowan Community College. 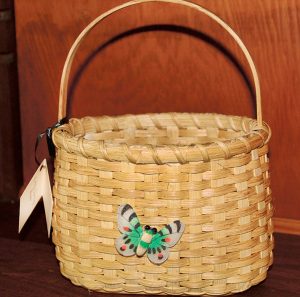 Handwoven baskets by Jean Eason and Becky Williams are featured in the art exhibit. Their baskets come in different shapes and sizes. Even when following the same pattern, no two look exactly alike.

“I was in a high stress job and it was something I could do that would relax me at night,” she explained about why she first got hooked on the hobby.

Quilting can be done by machine, but Thomas prefers the hand-quilting method instead. It usually takes her over a year to complete a piece. She typically uses 100 percent cotton but has also on occasion used fabric paper and other materials for her quilts.

For inspiration, Thomas said she just uses whatever fabrics and patterns she likes. Many of her quilts end up as gifts for friends and family. Some, however, are submitted as contest entries.

Thomas’ quilt “Dolphins in a Storm,” which is hanging up as part of the Revelle Realty art show, won a second-place ribbon in 2008 at the North Carolina State Fair. It also won The Golden Needle Award that same year from the Capital Quilters Quilt Guild.

The king-sized dolphin quilt is like a wave of different shades of blues with the dolphins splashing around the piece. The piece even includes embroidered stitching outlines of dolphins to complete the look. Thomas said it took three years of planning out and gathering the materials, and then 160 hours to design and piece the quilt top. That work was followed by 22 months of hand quilting all the material.

In total, she used over 395 yards of thread to complete the dolphin quilt.

Thomas’ other quilts in the art show are an eclectic mix of colors and patterns. Some incorporate Amish quilting patterns, while others include Thomas’ embroidery skills too. One quilt uses the town of Murfreesboro as the theme of the piece.

“It’s not a dying art like people think it is,” Thomas said.

In addition to the quilts, a variety of handwoven baskets are on display in the art show as well. 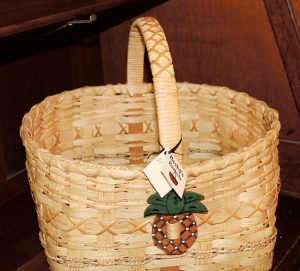 Jean Eason and Becky Williams have several years of basket weaving experience under their belts. Williams has been weaving regularly since 2012, and Eason estimates she’s been making baskets about 28 years or more.

Their basket display, which rests on shelving in the realty office near the front door, is composed of several large and small baskets made from different types of reeds and braided seagrass. They tend to stick with neutral colors like tan and brown instead of bright-colored reeds. Williams explained that is because neutral colors match easier with all kinds of interior décor.

One of the interesting things about weaving, they said, is how baskets can end up looking very different even if the weavers are using the same pattern. Each piece is the weavers own original creation.

“Two people when they’re making baskets, they don’t necessarily turn out to be the very same,” Eason explained.

The process of making a basket doesn’t usually take more than an hour or two. They work with wet reeds in order to get the material to bend properly.

“People say that it’s tough on your hands, but it really is good therapy,” Eason said, admitting she’s never had much of an issue with sore hands from the weaving.

Though the two art styles on display are different, the three artists are connected through one common thread: they all attend classes on their specific craft at the Winton Senior Center, sponsored by the Hertford County Office of Aging. Thomas attends the quilting class held on Fridays, and Eason and Williams attend the weekly basket weaving classes which will resume on Wednesday in September.

“The group we got at the senior center, they’re great,” Thomas said. “They share everything. All kinds of knowledge in there.”

Thomas credited the late Caroline Pratt and others from the senior center quilting class with helping her expand her knowledge of quilting techniques.

Eason and Williams too acknowledge the basket weaving class is a great opportunity to get together with people who hold similar interests.

“It’s a time to just forget about your work, things that you have to do, your everyday things, and just do something different,” Eason explained.

“One of the main things of going to basketmaking is the fellowship,” Williams added.

They admitted with a laugh they try to make sure to never have schedule conflicts on basket day. The class is something they don’t want to miss.

The “Over & Under” art show will be on display at Revelle Realty through September. People are welcome to stop in during business hours to view the artwork. Revelle Realty is located at 129 East Main Street, Murfreesboro, and is open from 10 a.m. to 2 p.m. Monday through Friday. For more information, call 252-396-1244.

The summer soaker continues. The start of a new workweek is a repeat of the previous one as more rain... read more