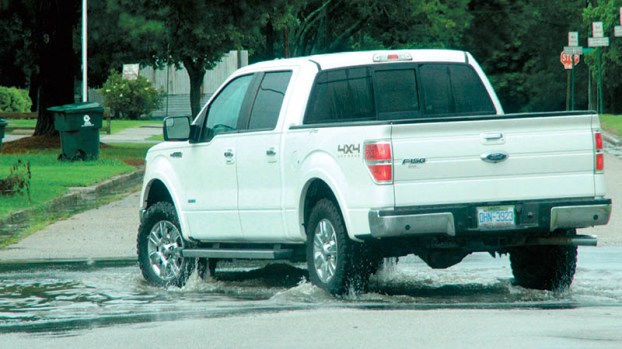 A pick up truck makes a turn at a flooded intersection in Ahoskie following another heavy downpour early Monday afternoon. | Staff Photo by Cal Bryant

The start of a new workweek is a repeat of the previous one as more rain is in store for an already super saturated Roanoke-Chowan area.

The National Weather Service office in Wakefield, VA is calling for the continuation of an unsettled weather pattern that set in last week. For at least today (Tuesday) and much of Wednesday, be on the lookout for a better-than-average chance of showers and scattered thunderstorms, with localized heavy rain and flooding possible.

This comes on the heels of rain measuring as high as eight inches last week in some part of the local area.

NWS Wakefield was showing rainfall totals for July 20-27 in the local area as follows:

Much of central and eastern Northampton was at 2-4 inches.

Bertie County received 2-to-4 inches in the extreme western section and a swath in its center from north of Williamston to near Powellsville. On its eastern edge along the Chowan River, 4-to-6 inches of rain fell. Along the southeastern tip of the county (Merry Hill/Midway area), 6-to-8 inches of rain fell last week.

In Ahoskie, the heavy rain that fell over the weekend is to blame for a sewer spill. According to a notice emailed by town officials on Monday, there was a discharge of untreated sewage from a sanitary sewer located at the intersection of Pembroke and Memorial Drive. The amount of the spill was approximately 5,000 gallons.

Meanwhile, the Cashie River at Windsor was at 6.6 feet as of 12 noon on Monday. It was expected to rise to 7.9 feet at 12 noon on Wednesday, which is right at minor flooding level (8.0 feet).

As of Monday, Bertie County officials said 2.6 inches of rain fell on Saturday alone. That caused some flash flooding, but it wasn’t attributed to the river.

The forecast calls for a 60 percent chance of showers and storms today (Tuesday) with a high of 84 degrees. New rainfall amounts will be between a quarter and half of an inch.

The showers and thunderstorms are expected to stick around Tuesday night. There, new rainfall amounts between a tenth and quarter of an inch, except higher amounts possible in thunderstorms, are expected.

The same is in Wednesday’s forecast (day and night) where there is a 60 percent chance of showers and storms and a high of 86. Another tenth to a quarter of an inch is expected, with higher amounts possible in thunderstorms.

Hopefully, the wet weather pattern will begin to break down later in the week.

Thursday’s forecast calls for partly sunny skies and widely scattered showers, with isolated thunderstorms in the afternoon hours. The high is expected to top out in the mid 80’s.

The rain chances fall to 30 percent on Friday and Saturday. Highs both days will be in the mid to upper 80’s.

NCDOT reminds people that avoiding driving is the best way to remain safe during heavy rainfall. If you do have to travel, drive defensively, slow down and leave extra space between your vehicle and those in front of you. Never drive through standing or rushing water. Six inches of water will reach the bottom of most passenger cars, causing possible loss of control and stalling. It just takes a foot of water to carry away many vehicles, while two feet of rushing water can carry many pickups and SUVs. Most flood-related drownings occur when someone drives through standing or rushing water, and their vehicle is swept away.

To stay safe when driving in bad weather, follow these tips:

If your car starts to hydroplane, take your foot off the gas, apply the brakes in a steady, slightly firm manner and steer in the direction of the skid. If you have a manual transmission, push in the clutch and let the car slow down on its own;

For vehicles with anti-lock brakes, apply more steady pressure to the brakes, but avoid pumping them;

If the rain is extremely heavy, pull over in a safe area, either in a parking lot or on the roadside with your emergency flashers on. Park far from any trees or other tall objects, and wait for the weather to improve;

If line markings on the road are not visible, do not take a chance. Turn around.

Do not drive into standing water that can hide hazards, including debris and fallen trees or powerlines.

Allow more travel time by reducing your speed by at least 5-to-10 miles per hour;

Turn on your low beam headlights and use the defroster to increase visibility;

Signal for turns ahead of time and brake early as you near a stop. Roads are the most slippery in the first 10 to 15 minutes of rainfall, especially if it has not rained for a while;

Pay attention to advisories and directions from law enforcement, and to any signs.

Do not drive around any barricades that may have a road closed.

Heavy rainfall often saturates the ground beneath trees with shallow root systems. Be especially careful when driving around a curve as a tree could be down on the roadway.

If you must drive, be sure your tires and brakes are in good working condition.

Be patient and do not pass lines of traffic.

Turn on your headlights, as required by North Carolina law, while using your windshield wipers – regardless of the time of day.

WINTON – Two women were hospitalized after gunshots rang out in Winton over the weekend. Meanwhile, the man responsible for... read more