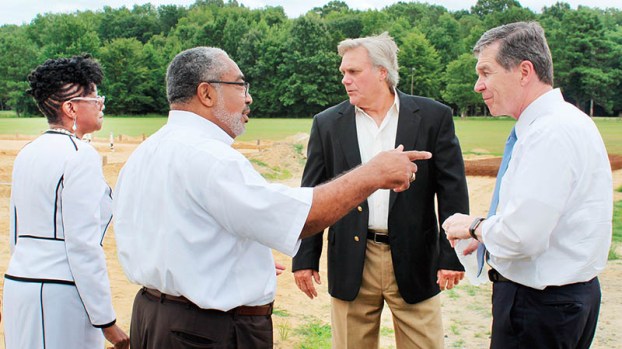 Governor Roy Cooper (right) speaks with Bertie County Commissioners (from left) Ernestine Bazemore, Ron Wesson, and John Trent at the site of the future Blue Jay Recreation Center off Indian Woods Road during a brief visit to the county. Cooper missed the May groundbreaking due to official state business, but promised the community then that he would return. | Staff Photo by Gene Motley

BLUE JAY – When his gubernatorial duties called Governor Roy Cooper away last May from a planned visit to the Bertie County community of Blue Jay, he figuratively borrowed from the famous words of Gen. Douglas MacArthur.

As spring storms ravaged western North Carolina this past spring, the Governor’s original plans during his May 31 visit to Bertie, where he helped break ground on the new county EMS Station-1, called for him to visit the Blue Jay community. However, he had to postpone that stop on his tour.

Following the groundbreaking, the Governor then jetted to the western part of the state to inspect flood and storm-damaged areas in Polk, Rutherford and McDowell counties following his State of Emergency declaration for the region.

In early May, the Bertie County Commissioners announced the Blue Jay community had been awarded a $150,000 grant from the Kate B. Reynolds Charitable Trust of Winston-Salem for construction of a walking trail and other facility improvements. This included a new recreation center building, construction for which has already begun.

“I want to thank the Governor for coming,” said Recreation Director Ronald Rascoe, “For our citizens, your help and participation has made this day a success, and this vision coming to life.”

Cooper expressed pride in returning to Bertie County, jokingly reminding the crowd of his days at Northern Nash High School when they played the Bertie Falcons in football and basketball.

“I want to thank Bertie because you guys got hit by two hurricanes,” the governor said. “This county pulled together, and you all have done amazing work; but it’s not finished, we have more to do.”

Earlier in the day, Cooper visited the Hurricane Matthew Housing Recovery Center in nearby Windsor.

“We want people who’ve suffered losses to make sure they apply for hurricane relief. We’ve put over $10 million into Bertie County, and we’ve just received some hazard mitigation money for 45 houses to be either elevated or bought out; and, we’re going to continue to work to get people the aid they need,” he stated.

In his brief remarks, Cooper also made mention of his rural eastern North Carolina roots.

“But beyond disaster relief we know the opportunities and the challenges of living in rural eastern North Carolina,” he emphasized. “I tell people across the country, and also across the world, this is a special place where there’s a lower cost of doing business, a lower cost of living, and where you have hard-working people, and a slower pace of life.”

Cooper complimented the Bertie County Commissioners and 3rd District State Senator Erica Smith for their work in helping secure for funding for the recreation center; but most of all he said it’s the volunteers of the Blue Jay community that will make it work.

“You’ve got volunteers who go out and save lives, and our officials who make life better for all of us,” he intoned. “And as the CEO of North Carolina, I have one mission-statement for you: I want a North Carolina where people are healthier, better educated, where they have more money in their pockets, and where they have an opportunity to live a more purposeful and abundant life.”

Bertie County Commissioner Ron Wesson thanked the Governor for keeping his word to return to Blue Jay, and to the visionaries that supported the 501-C3 non-profit that helped the community secure the recreation center funding.

“Thanks for keeping the faith,” Wesson said. “Trust me, there’s more to come for Bertie County, and we’re going to make you proud.”

Anthony Smallwood, a lifelong Blue Jay community resident, and whose father Bart F. Smallwood founded the Blue Jay Recreation Center in the 1960s, also thanked the governor; though he jokingly referred to him by the name of his predecessor, Pat McCrory.

“I know I made a mistake, but own it to my heart,” Smallwood said.

“This is truly a blessing for Blue Jay and all of the people who helped to make this happen,” Smallwood added.

He also reiterated the community’s commitment to continued recreation efforts at the park.

The Kate B. Reynolds Health Care Division awarded the project a capital grant for $150,000 to support the construction of a paved walking trail, six-foot-wide, around the perimeter of the five-acre park. And, in August 2017, the State of North Carolina approved an $80,000 grant through the Department of Cultural Resources which helped provide additional funds for the 70-x-100 foot recreation/community building.

“In 1976 we had one building over here, it housed recreation items as well as fire equipment,” he said. “It deteriorated until we tore it down, but the state said we had to have a building for the fire truck, so (the fire station) was first priority. But we sold chicken, hot dogs, and barbecue plates to get another building together, and that’s what we’ve done. The Commissioners came in and they’ve helped take away a lot of heartaches.”

“Pay attention, officials, but think about the people who put you there,” he said. “Think about us in Bertie County. That (recreation center) building is more than Indian Woods, Blue Jay, and Spring Hill, it’s for everybody.