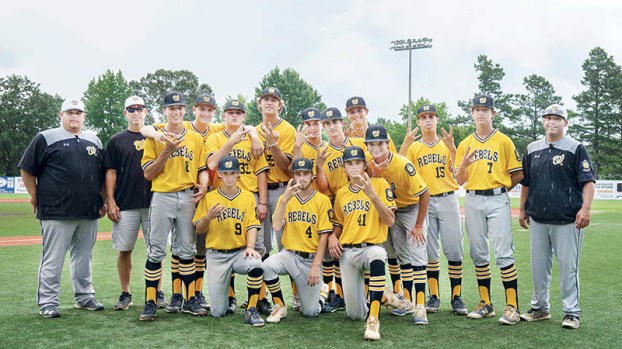 ASHEBORO – It was the perfect ending to a perfect season.

Alden Cottle was dominant on the mound, twirling a two-hit shutout, and at the plate by banging out a pair of hits and driving in four runs to lead Windsor Post 37 to a 10-0 win over Mocksville Post 54/174 here Wednesday in the North Carolina Junior American Legion state championship game.

The win in the title game placed the icing on a perfect 23-0 season for Windsor as well as marking the team’s first-ever state title.

“I am so proud of this team and the way we played today and for the entire season,” said Post 37 head coach Bobby Harmon following Wednesday’s contest. “We’ve been aggressive at the plate all year, and did so again today. We’ve used our team speed to be aggressive on the basepaths and we’ve played solid defense. Put all those intangibles together and you have all the ingredients for an undefeated season and a state title.”

What the coach and his players didn’t have any control over was Mother Nature.

Windsor did manage to beat Mother Nature and sneak in one other game in Manteo, winning a 7-6 thriller in eight innings on Sunday morning against defending state champion South Caldwell. Ironically, it was Cottle’s walk-off RBI single in the bottom of the eighth that scored Trenton White with the game-winning run.

From there, the weather completely deteriorated along the Outer Banks. That forced the coaches of the four remaining teams, to include Windsor and Mocksville (both unbeaten at that point in the state tournament) to seek a drier location.

Eventually, the coaches opted to let Windsor and Mocksville play a one-game, winner-take-all affair to decide the state championship. That game was initially scheduled to take place on Tuesday in Winterville at Minges-Overton Ballfield at Pitt Community College. There, the summer soaker followed the teams inland and that game was washed out.

It was there that the Rebels wasted little time in letting the rest of the state know what the good folks back in the Roanoke-Chowan area already knew – Windsor, no matter how far from home, was a team in search of perfection.

The Rebels put four runs on the scoreboard in their very first at-bat. Cameron Stevens reached on an infield single, motored to second on an error – one of four miscues on the day by Mocksville – and raced to third on a wild pitch. Cottle drew a walk before Stevens scored the game’s first run on another wild pitch, which allowed Cottle to race to third.

After a walk to Brandon Beach, Cottle made it a 2-0 game by easily scoring when Caleb Damo stroked an RBI single to rightfield. Jake Raynor followed with another RBI single to right, scoring Beach. Damo scored on an error on that play, stretching Windsor’s early lead to 4-0.

Windsor added a solo marker in the bottom of the second inning. Stevens singled to right followed by Trenton White reaching on an infield single. That duo flashed some of the aggressive baserunning their coach referenced earlier in the story as they successfully executed a double steal. That set the table for Stevens to make it a 5-0 lead when he scored from third thanks to an RBI sacrifice fly off the bat of Cottle.

The Rebels scratched for another single run in the bottom of the third and a 6-0 advantage. There, Damo reached on an error and raced to third on Raynor’s single to centerfield. Damo scored on Wood Trowell’s RBI groundout.

The Rebels polished off their lopsided win by plating two markers in the bottom of the fifth. Evan Wells singled to right and raced to third when Stevens reached first on an error. Wells was erased at the plate when trying to score when White rolled a grounder to shortstop. Stevens, who stole second before White’s grounder, went to third on that play while White was safe at first on the fielder’s choice. Stevens and White then both scored when Cottle ripped a pitch over the centerfielder’s head for a two-run double, which ended the game due to the 10-run mercy rule.

Coupled with his big day at the plate – as well as for his three games in the statewide event where he had seven hits and five RBIs – Cottle was named as the state tournament’s MVP.

Windsor finished with 13 hits, led by two each from Stevens, White, Cottle, Damo and Raynor.

TIJUANA BAJA CALIFORNIA. – Trayvon Lathan was thinking of only one sure thing as the games were winding down in the... read more