AHOSKIE – The annual School Bus “Roadeo” tests the skills of the drivers who carry precious cargo every day of each school year.

Eric Turner, a Hertford County school bus driver with over 20 years of experience, is very familiar with the annual safe-driving competition on many levels. He represented North Carolina for the third time at the international level this past weekend in Philadelphia, right next to the football stadium of reigning Super Bowl champs, the Philadelphia Eagles. Turner said they jokingly referred to the competition this year as the “Super Bowl Bus Driving Competition.”

“I’m going to do my best and have fun and let the Lord take care of the rest,” Turner said of his mindset before he travelled to compete against participants from across the United States and Canada. 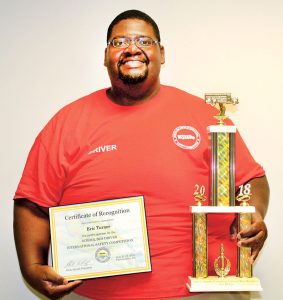 Eric Turner holds the 2018 North Carolina School Bus “Roadeo” first-place trophy in one hand and a certificate in the other, denoting his participation in an international event that tested his driving skills. Turner is a driver for Hertford County Public Schools and a three-time state champion. | Staff Photo by Holly Taylor

Turner has been able to compete in the international competition three times. He first traveled to Charleston, SC in 2014, coming in 36th place. In 2017, he competed in Indianapolis, IN and earned 17th place. This year in Philadelphia, he placed 6th overall in his category.

“I’m getting closer and closer to number one,” he said with a smile, adding that his hope would be to return again next year and capture first place.

Turner explained that he looks back over his performances to find out what areas he can improve in for the next round. Last year in Indianapolis, he said he did poorly in the railroad track turn portion of the test. This year, he was the only competitor in the division who received a perfect score for the railroad track turn.

One of the things Turner said he really enjoys about the competition is being able to make new friends, hear their stories, and talk about bus driving. Turner said he spoke with this year’s winner in order to gain more insight on how to do better next time. The advice he received was simply to keep practicing.

“But I don’t get to practice stuff like they do,” Turner acknowledged. “If I don’t do it while I’m driving my bus, I won’t see it.”

Turner’s usual bus route takes students to and from the Hertford County Early College High School each day. He beamed with pride talking about the students, describing them as one of the best groups he’s ever had.

“I try to be [some]one they can confide in if they’re having problems or something like that,” Turner explained. “I try to be strict, but I try to be fair. And we get along pretty good.”

The competition is composed of many things Turner does on a regular basis. The obstacles include student pick-up, straight line, curbside pull-up, back up stall, left turn, and more. Turner has to be careful to complete each task in the allotted time without hitting any of the barricades. He said the diminishing return challenge—where they drive in a straight line beginning with 10 inches of clearance on either side and ending with only two inches—is one of the more nerve-wracking obstacles.

The practical part, however, is only half of the competition. There is also a written test they have to complete. Turner said he’s never been a big fan of tests, but he usually does pretty well even if it was a struggle to complete the test in the allotted 30 minutes.

“I finished just as he was saying ‘pencils down,’” he recalled with a laugh.

Overall, Turner said, “the competition is just fun. It is really fun to do something that you enjoy doing. That’s all worthwhile.”

While Turner’s goal is to make it back to the international competition again next year, he acknowledges that there are plenty of skilled bus drivers out there who keep the competition close. He enjoys it that way.

“I’m just the one with the title this year,” he said humbly.

But even though Turner likes the trophies he’s received for competing over the years, he still keeps his focus on his passion for the work.

BLUE JAY – When his gubernatorial duties called Governor Roy Cooper away last May from a planned visit to the... read more