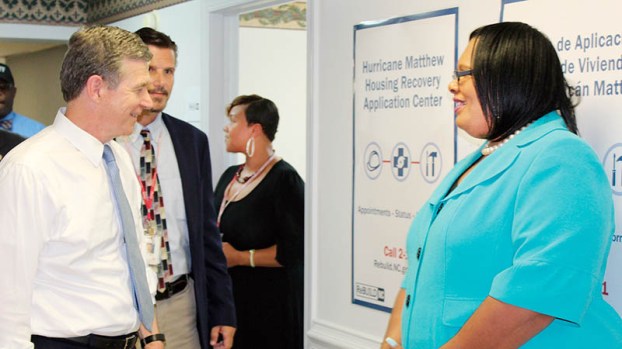 NC Governor Roy Cooper (left) tours the Windsor Hurricane Matthew Housing Recovery Center during a stop in Bertie County on Friday. Speaking with him is the center receptionist Camille Taylor (right), and standing beside the Governor is Windsor ReBUILD NC Manager Andy Tacka.

WINDSOR – With words of encouragement, as well as determination, Governor Roy Cooper vowed the state would do all it could to aid Bertie County and other northeastern North Carolina victims of 2016’s devastating storms.

Cooper made those remarks as he toured the Windsor Hurricane Matthew Housing Recovery Application Center here on Friday, one of the three newest centers that opened June 28.

The purpose of the center is to help hurricane survivors whose homes were damaged by the devastating storm (along with Tropical Storm Julia) in late Summer-Fall 2016.

The Windsor ReBUILD NC Application Center is located at 1001 So. King Street in Windsor at the old NCWorks Career Center. 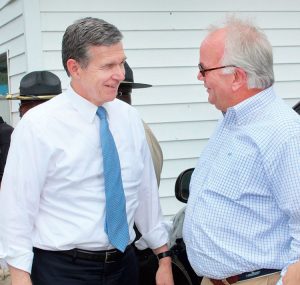 Windsor joins Fair Bluff and Kinston along with the four original centers in Fayetteville, Tarboro, Lumberton and Goldsboro to help people apply for financial help to repair or rebuild their homes.

Friday, the Governor stopped by the center where, for about a half-hour, he met with officials, counselors, intake specialists, and even chatted with some applicants.

“What we’re trying to do is get the word out there’s relief available for people who suffered from damage because this town was hit by two storms,” Cooper said in a short press briefing at the center.

“We want to let people know that if you’ve started the application process that we want you to complete it,” he added. “Bring in your paperwork so we can provide you with some help.”

“You can ask questions of the intake counselors and they can help you to make sure you get the relief you need,” the Governor stated. “Here in Bertie County alone we’ve been able to distribute over $10 million, and another $5.2 million has just been appropriated for 45 properties to either be elevated or to be bought out. About $655 million has been distributed statewide.”

The help with housing repairs, homeowner reimbursement and other housing-related issues is made possible by North Carolina’s Community Development Block Grant – Disaster Recovery (CDBG-DR) program which is funded by the federal government through U.S. Housing and Urban Development.

“For people who have housing issues – even if you’re a small business landlord, or you’ve had some rental property affected – you can benefit,” Cooper noted. “We know people who get hit by a natural disaster are often people who can afford it the least. This recovery can help the economy here in rural eastern North Carolina, so we want to make sure the people who deserve it, get it.”

“A lot of people sometimes are hampered by the fact they may be living someplace else other than the place they lived during the hurricane,” he acknowledged. “They may have communication issues or issues with transportation. We want to make sure they know about this. There’s a lot of paperwork involved, and that can be frustrating. We want people to know about this so more people can benefit.”

Following his visit to the center, the Governor then remained in Bertie County where he visited the Blue Jay community off Indian Woods Road. He was slated to be on hand for the groundbreaking for the new Blue Jay Recreation Center back in May, but was called to the western part of the state which was experiencing flooding and storm damage at that same time.