TIJUANA BAJA CALIFORNIA. – Trayvon Lathan was thinking of only one sure thing as the games were winding down in the Circuito de Baloncesto de la Costa del Pacífico, or Pacific Coast Basketball Circuit (CIBACOPA), and its 2018 playoffs championship series.

Namely, that this would be his last tournament as a professional basketball player.

Lathan’s team, “Los Burro-Zebras”, as the locals call them, had a 3-2 lead in the series heading into that clinching game and were just a win away from obtaining their third-ever CIBACOPA championship.

The CIBACOPA are a 10-team Mexican professional basketball league located primarily in northwest Mexico. Tijuana is located on the California-Baja Peninsula border, just south of the U.S. and the city of San Diego.

Thursday night, the border city team completed the task in hand and defeated the team from Sonora by a score of 87-73 to claim the league title. 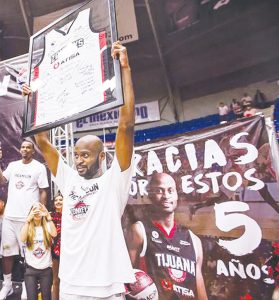 Former Chowan University basketball player Trayvon Lathan holds aloft a framed jersey signed by teammates, with a poster of his likeness in the background as he announced his retirement from professional basketball. Lathan retires after leading his Tijuana Zonkeys to another CIBACOPA championship last Thursday in Mexico.

Thanks to the work of the team, both the players, technical staff, as well as the club staff, the Zonkeys were crowned champions and Lathan retired in the best possible way after five professional seasons wearing the colors of the “donkey-zebras”.

The 6-foot-7 guard attended Chowan University where he averaged 16.1 points per game and 6.4 rebounds. Once he graduated, Lathan moved to California and worked out with another former Chowan player, and current New Orleans Pelicans assistant, Fred Vinson for a few months.

Lathan, who was honored after his final game, was presented with a special jersey in honor of his career and left on a high note as the team captain of the Zonkeys. He also gave a special thank you to the fans that made their presence known with loud cheers at the Auditorio Municipal de Tijuana.

“I thank you, guys,” Lathan said. “I’ve never seen a crowd this big. Thank you guys so much and I’m going to miss you guys.”

The auditorium was sold-out and the fans really gave it their maximum effort like the players on the court.

“It was what I expected, before the season, I didn’t know if I was coming back”, an emotional Lathan said as confetti fell from the rafters and his Zonkeys teammates serenaded him with platitudes. “I came back for a senior year and that’s how I wanted to say goodbye with my third title with the team,” said Lathan, who is one of only two players on the current roster who have won all three titles with the Zonkeys.

“This title is significant,” he stated, fighting back tears. “I appreciate the support. This past year there were ups and downs, but everything finished as expected. I will always be grateful. ”

“It means a lot to me (to win),” he added. “The last five years were wonderful, but, without a doubt, the third title is the most important moment of my entire career, because that’s how I wanted to say goodbye.”