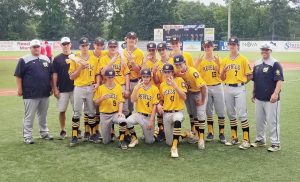 Cottle was also the winning pitcher, twirling a two-hit shutout. Windsor, meanwhile, banged out 13 hits and played flawlessly in the field, committing no errors.

Windsor – who won the Area One title to qualify for the state tournament – finishes the season with an unblemished mark: 23-0.

The game – now a one-game affair, instead of a best-of-three – was moved first from Manteo’s Coy Tillet Field where the entire state tournament was to take place. That eight-team event began last Friday. After heavy rains pelted the coast, preventing Monday’s four-team semi-final between the Rebels, Mocksville, Rutherford Post 423 and South Caldwell Post 29, officials then decided to make the championship a winner-take-all one-game finale.

The trouble was finding a dry ball field.

The game was first moved to Minges-Overton Ballfield at Pitt Community College in Winterville for a Tuesday start, but the summer soaker continued and eventually that game was washed out.

Finally, officials settled on McCrary Field in Asheboro as the venue with a 1 p.m. Wednesday start.

The Rebels are expected back in Windsor and Williamston sometime later Wednesday evening.

Full details on the game will be available in Saturday’s edition of the Roanoke-Chowan News-Herald.

WINDSOR – Three members of the charter school management group that has assumed the charter of the former Heritage Collegiate... read more