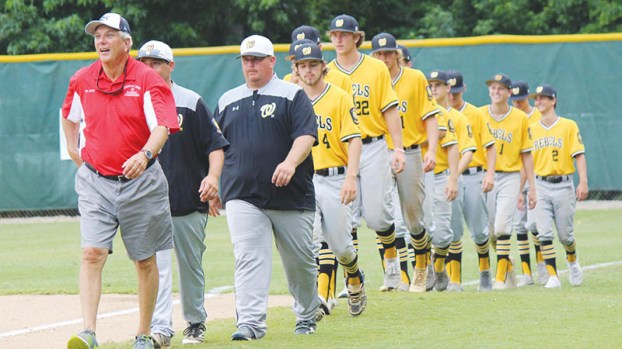 A late run by Post 29 in the fifth allowed the Spartans to come back and kept the score tied at 6-all before sending the game into extra innings.

Heavy rains on Saturday pushed this contest back one day, and in an effort to keep the tournament on schedule, both teams had an early call with the game set for a 10 a.m. start.

The Rebels got on the board first in the bottom of the first inning when Trenton White and Cottle stroked back-to-back-base hits and Brandon Beach walked to load the bases. Caleb Damo then hit a line drive shot to left field scoring White and Cottle. Jake Raynor followed with a base hit to right that plated Beach, but Damo was out trying to score behind him. Still, Post 37 had grabbed an early 3-0 lead.

After an easy first inning, South Caldwell got to Rebel starter Wood Trowell in the top of the second inning, scoring four runs to grab a one-run lead after an inning-and-a-half. Gavin Barlowe, Arin Gaines, and Tanner Ledford all had RBIs in the inning for the Spartans.

Trowell was chased one inning later after South Caldwell scored another run on a sacrifice fly for a 5-3 lead after three complete.

Cody Stalls, who came on in relief of Trowell was able to hold the Spartans at bay for the next two innings.

In the bottom of the fourth, Cameron Stevens got a one-out base-hit to right field followed by White drawing a walk to get two Rebel runners aboard. One out later, Beach stroked a deep three-run shot 330 feet over the left field wall straight into Dough’s Creek and that bomb allowed Windsor to re-claim the lead at 6-5.

But the Rebel lead wouldn’t last as South Caldwell knotted the game up at six in the top of the fifth inning, when Justin Eggers drew a two-out walk, scoring the tying run. South Caldwell still had a threat with the bases loaded, but Stalls was able to get a pop-fly out and get Post 37 out of trouble and out of the inning.

Both teams had chances to break the stalemate, including Windsor getting a runner in scoring position in the bottom of the seventh, but he was thrown out trying to steal third, sending the game on to extra innings.

In the bottom of the eighth, with two out, White doubled deep to center field and reached second base standing up. The next batter, Cottle, wasted no time and smacked the game-winning single to rightfield, allowing White to score and setting off a wild frenzy among the smattering of Windsor fans that had arisen early, sacrificing church in order to make the trip out to the ballpark.

Trowell started for Windsor, he allowed seven hits and five runs over two innings, striking out one. Stalls got the win in relief, going six strong innings and giving up a run on two hits with one walk and three strikeouts.

Isiah Kirby in relief of Trey Triplett was the loser for South Caldwell.

Windsor tallied 13 hits in the game. Cottle was 3-for-5, while Stevens, Trowell, Raynor, and White each managed two hits each for Post 37. Damo and Beach had one hit apiece – Beach’s blast accounting for his three RBI.

South Caldwell collected nine hits on the day. Hunter Ingle and Kirby each had three hits for the Spartans.

Windsor won its 22nd consecutive game without a loss and remained in the winner’s bracket. The Rebels moved on to another 10 a.m. game: this time in the semi-finals against Rutherford County, also 2-0 in the tournament. That game was scheduled to be played on Monday depending on the weather.

GREENSBORO – They say when you get your chance on the big stage you’d better make the most of it.... read more