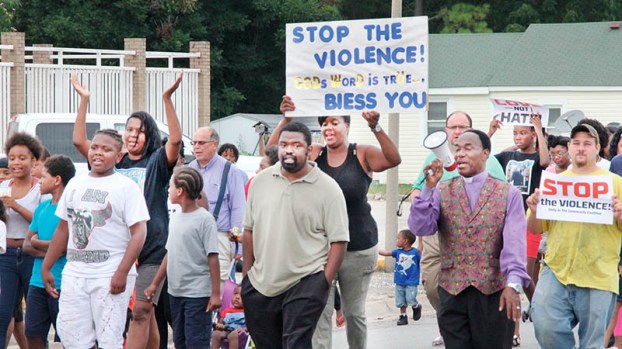 Pastor C. David Stackhouse (with megaphone) leads Friday’s anti-violence march down a portion of Lloyd Street, en route to the site where of 33-year-old Dwight Nathaniel Saunders was murdered on July 13.

Open your eyes and your mouth

AHOSKIE – Too much violence….too little discussion.

Those two facts came to the forefront here late Friday afternoon when local Pastor C. David Stackhouse and the Unity in the Community Coalition led a “Stop the Violence March” through the streets of Ahoskie.

The event served as a platform for the public to become involved in an effort to curb a rash of murders in Ahoskie. Two of those homicides have occurred just recently – the June 23 slaying of 29-year-old Reco Larone Lewis while he stood outside in front of an apartment at Kennedy Court, and the shooting death of 33-year-old Dwight Nathaniel Saunders while he was exiting a residence on Church Street on July 13.

Meanwhile, there are three other unsolved murders in Ahoskie since March of 2014.

Friday’s march began near the scene of Lewis’s murder and ended across the street from where Saunders died. 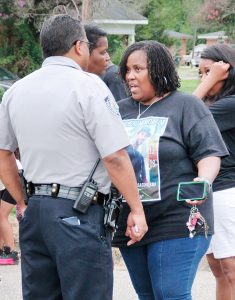 “We have sad hearts, we have wounded hearts,” said Rev. Stackhouse as he opened remarks following the march. “But we have people who care….our law enforcement cares; our town council members care; our county commissioners care.”

Stackhouse, who is the pastor at New Ahoskie Baptist Church and a member of the Ahoskie Town Council, stressed that the Ahoskie Police needs the public’s help in solving these murders.

An unidentified woman then lifted up a prayer for those in attendance.

“We need to stop this violence; black against black and white against white; it just doesn’t make any sense,” she prayed. “Please, Lord, help us show our fellow man the right way, the Lord’s way, because right now they don’t know what they’re doing.”

Ahoskie Police Chief Troy Fitzhugh told the crowd that his officers are, “doing everything in our power to solve these murder cases. We have collected and analyzed evidence, but that doesn’t necessarily mean we have a person of interest in mind.

“We’re dealing with people who have a total disregard for life,” Fitzhugh continued while speaking of those responsible for these senseless murders. “I have trouble understanding how one person can hate another person so much to the point of ending their life. But there’s one thing for certain, those that kill another human being will have to one day stand before God. There the truth will be revealed.

A family member of Ahoskie’s latest murder victim (Saunders) spoke of another possible suspect in that case. Currently, only Cola Terrell Harrell, 29 of Ahoskie, stands charged with first degree murder in the July 13 slaying.

“There’s somebody else out there. I want any and everybody that was responsible in my son’s death to be held accountable,” she said.

“This is why we’re here today, opening up the chance to have discussion among ourselves and with our local law enforcement officials,” said Stackhouse. “We’re not going to leave here today until we’re satisfied with what we’re hearing from our law enforcement. Let’s talk to each other intelligently and without hidden agendas. But please be reminded that there are some things they (police) cannot address at this particular moment due to their ongoing investigation.”

Rev. Ray Faircloth Jr., pastor of Higher Ground Church of Ahoskie, stressed to the crowd that, “If we are to find any peace we have to seek out Jesus Christ.

“Anytime something like this takes place, we end up reading from the word of God,” Faircloth continued. “Let’s be reminded today of Second Chronicles, the seventh chapter and 14th verse: ‘If my people which are called by my name shall humble themselves and pray, and seek my face and turn from their wicked ways, then I will hear from heaven and I will forgive their sin and I will heal their land’.”

“We know that violence is on the rampage all over the land. But God we’re asking you to find favor here in Ahoskie. Give us the strength and power to all get along and not resort to taking lives. Let us find that life is more important. God, we ask that you give resolution to all the unanswered questions we have,” Pastor Ballance said.

Hertford County Sheriff Dexter Hayes took note of how the future of those families who have lost loved ones to murder is impacted.

“Every time a young brother or a young sister is taken away from us early, generations are lost….generations are gone. Sons, brothers, sisters, daughters, fathers, mothers, uncles, aunts are gone,” he said.

“I’m a God-fearing man; I’m saved through the love of Jesus Christ. I’ve lived here for most of my life and it seems like every time you turn around there’s a murder,” the Sheriff added. “We need to put ourselves in the shoes of those who are left behind, those who are suffering and crying out for answers. It’s our job as law enforcement officers to find and arrest those responsible. No, that doesn’t bring the victim back to life, but it does allow his or her family members some closure.”

The Sheriff said the biggest ally that law enforcement has on its side are the local citizens.

“If you see something going on in your neighborhood, speak up….call law enforcement and let them know before the incident grows to the point where something bad happens,” Hayes remarked. “Don’t turn a blind eye. We’ve got to stand up and take our neighborhoods back, take our towns and communities back. We can’t be afraid to speak out. We have to seek justice. 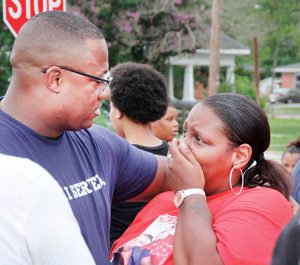 “What if that was me and my family; would I want my mother, sister, family members walking around with a void in their lives that they do not know how it got there,” Hayes added. “When we allow the Devil to run rampant in our neighborhoods, so much to the point where we no longer care about our fellow man, then the Devil is winning.

“We have to stand up…all it takes is one voice to say I’m no longer going to stand by and let the Devil win,” the Sheriff continued. “It’s sad when young brothers are gunned down at home and nobody wants to say anything. If I can’t get you to talk to me, then I can’t get it taken care of.

“In the 50’s and 60’s the Ku Klux Klan was killing black people; now we’re killing ourselves. Hatred and racism is taught, it’s not born. We have to stand together – white, black, Hispanic – if we are to end these killings. Law enforcement can’t do it by themselves, we need your help. Find someone you trust and tell them what you know,” Hayes concluded.

Local community activist Stewart Fields said the public’s reaction in the days and weeks after Friday’s march will speak volumes on how serious they are over stopping violent crime.

“This march, these words we’re hearing today, are healthy, but there remains a disconnect between our citizens and the police,” Fields noted. “We need to bridge that gap if we are to move forward, and we can do so by working together. That starts with us loving one another and treating each other like family. We have to put action into that love; when we start pulling each other up we will all stand up.”

Following benediction, Fitzhugh and Hayes mingled among the crowd and fielded questions.