TARBORO, NC – Margie Harrell Minton died at the age of 95 on Friday, July 20, 2018, in Tarboro, North Carolina, where she had lived at the Fountains at the Albemarle. She was formerly a resident of Ahoskie, NC. 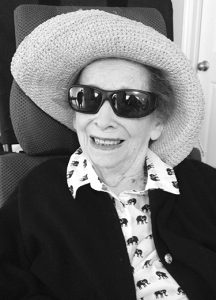 “Margie Rhea” was born on June 26, 1923 in Colerain, NC to parents Isaac and Lillie Holloman Harrell.

After graduating with a major in home economics from Women’s College in Greensboro, N.C., she went on to teach in the Hertford County School system for thirty years.

She was active in her community and church in Ahoskie, where she was a member of the Ahoskie Woman’s Club, the First Baptist Church, the Sarah Raynor Bible Class and other WMU groups. She maintained ties after moving to

Tarboro and in 2007 was awarded Ahoskie Woman’s Club “Woman of the Year” Award.

She had an enormous love for her family and was devoted to keeping them close. She was loved by many and was often a voice of wisdom and inspiration, encouraging her caregivers to pursue careers in nursing.

A funeral service will be held at 11:00 a.m. on Wednesday, July 25, 2018 at The First Baptist Church in Ahoskie, with Rev. Dr. Jesse Croom and Rev. Dr. Trey Gilliam officiating. Burial will follow at Highland Memorial Gardens.

In lieu of flowers, the family has asked that memorial contributions be made directly to the Lil Boyette Teacher’s Scholarship Fund of the Ahoskie Women’s Club, c/o Ellen Askew, 251 Askewville Road, Windsor, NC, 27983; or you may donate online by visiting www.tmcfunding.com/search; then type Margie Minton.

The family wishes to extend their grateful appreciation to her devoted longtime companion, Beth Marlow Green. In addition, they thank Mary Whittaker, Betty Gaskins, Angela Scott, Cookie Cooper and Bonni Wilkerson for their thoughtful support in maintaining her independence and quality of life.

Garrett-Sykes Funeral Service-Ahoskie Chapel is handling arrangements for the Minton family and online condolences may be directed to the family by visiting www.garrettsykesfs.com.