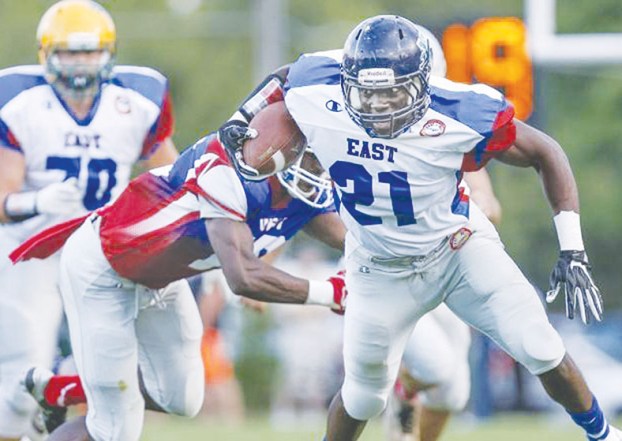 Ex-Northampton County High’s Angelo Rooks (#21) led all rushers in the All-Star contest with a game-high 83 yards. However, the West won the game, 23-21.

GREENSBORO – They say when you get your chance on the big stage you’d better make the most of it.

That’s what a pair of former running backs from two Roanoke-Chowan area high schools did Wednesday evening at Greensboro Grimsley’s Jamieson Stadium playing for the East squad in the annual East-West All-Star game for 2018’s graduated seniors. The West team triumphed in the end, however, 23-21.

“I told him this was a great, great opportunity for him, and that the friends he’d meet and make here would last him a lifetime,” said Rooks’ former coach, George Privott. 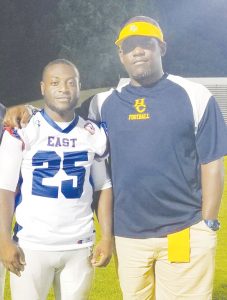 Rooks lost a couple of yards on his first carry, but the next time he touched the pigskin he broke tackles for a 45 yard scamper that led to the East team’s first score. Despite the team’s losing effort, Rooks finished the game as the leading rusher in the contest with 83 yards gained on the ground on six carries.

“He might have gotten more,” added Privott. “But the coaches wanted some of the other players to get touches. Thanks to his big runs he really had an impact on the outcome of the game.”

Privott played in the East-West game out of Hertford County High School in 1994.

“When I played, one of the players on my team was (former NC State and NFL St. Louis Rams) wide receiver Torry Holt,” effused Privott. “I told Angelo you never know who you’re playing with that might end up in the NFL.”

Rooks finished his prep career helping guide the Jags to an 11-2 record, including a school-record 11-game win streak. He finished just shy of a 1,000-yard rushing season, gaining 991 yards his senior year. He played four seasons of varsity football averaging 6.4 yards per carry, and last season had over four games where he ran for 100 yards or more, and scored 10 touchdowns.

Rooks had planned to walk-on at Virginia University-Lynchburg, but he and former fellow backfield-mate Jevontae Hicks got busy with the weights and worked out for new Dragons head coach, and former UNC player, Bobby Rome. Rome, in his first season at the helm, found a way to get both ex-Jags on scholarship and on the roster, so he and Hicks could reunite on the field come this fall.

Another Hertford County High product also ‘showed-out’ in the game.

Former Bears running back Kyeem Perry also played in the game – oftentimes spelling Rooks, and sometimes they were in the backfield together.

Perry finished with 18 yards on eight carries, including a 14-yard scamper that helped the East build a 14-3 third quarter lead. Perry also showed off his prowess out of the backfield, with one catch for 16 yards receiving. His late fourth quarter catch helped the East draw closer before the team ran out of time.

“All the hard work he’s put in, for his entire career, really; to be selected to play in this game is validation for that,” said Hertford County High coach Terrance Saxby. “You’re happy for the kid, for the school, and it gives you something else to tell your kids to look forward to if you do things the right way.”

For the 2017 campaign Perry broke two HCHS football school records: the career rushing mark with 5,265 yards gained on the ground during a four-year career; and, the single-season rushing record of 2,045 yards set in 2017.

Perry has committed to play football next season at Chowan University.