RALEIGH – Despite operating on a shoestring budget in a rural county, Dr. Monica Smith-Woofter has always sought out innovative ways to strengthen local education since becoming the Superintendent of Northampton Public Schools in 2014.

Apparently, someone was watching as Smith-Woofter began to implement programs and strategies that are now being felt in the realm of overall student achievement within Northampton Schools.

The North Carolina School Superintendents’ Association (NCSSA) has announced the selection of Dr. Smith-Woofter as the recipient of the Dr. Brad Sneeden Leadership Award. The award is presented in honor and recognition of a superintendent who has demonstrated a strong commitment to life-long learning, unwavering integrity in leadership, and transformation of vision into action. 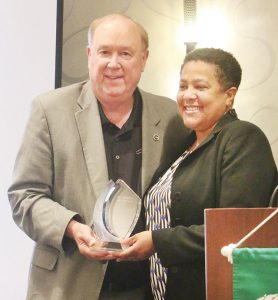 Association’s Next Generation Superintendent Development Program (NGSDP), a program which is designed to empower transformational education leaders for North Carolina’s public schools. Dr. Smith-Woofter was selected by fellow superintendents and thought partners in the NGSDP.

“It is an honor and a privilege to be selected by my peers for such a prestigious award. I have always been a lifelong learner, and as an educator it is a fundamental principle for future success.,” said Dr. Smith-Woofter.

In winning this prestigious award, Dr. Smith-Woofter will receive a check in the amount of $1,000 for personal/ professional development of her choice.

The award is named in honor of Dr. Sneeden who was serving as Carteret County Schools’ Superintendent at the time of his death in October, 2008 at the age of 56. Among the innovative efforts he brought to this district was the establishment of the Marine Science Academy, later renamed as a memorial to him, which exposes students to hands-on marine science activities.

Previously, Dr. Sneeden served as the Associate Vice-President for Leadership Development and Director of the Principals’ Executive Program, the Deputy State Superintendent for the North Carolina Department of Public Instruction and State Board of Education, an adjunct professor with the Department of Educational Leadership and Director of the Office of School Services at East Carolina University, and as the Craven County Schools’ Superintendent. Dr. Sneeden led with innovation and vision in preparing administrators for visionary leadership while never wavering from ethics of the highest order.

In selecting the award winner, superintendents were asked to consider the following criteria:

Demonstrates vision and the ability to translate vision into specific goals. The recipient should be a person whose leadership has resulted in his or her district developing and/or implementing innovative programs and projects to benefit students.

Demonstrates a strong commitment to life-long learning, focusing on the continuous improvement of his or her leadership skills

Demonstrate evidence of setting and achieving high standards of ethical conduct within his or her organization.

Commenting on Dr. Smith-Woofter, NCSSA Executive Director Jack Hoke said, “Dr. Smith-Woofter exemplifies the traits that guided Dr. Brad Sneeden’s career in educational leadership. Dr. Smith-Woofter has demonstrated a vision for the Northampton County Schools, as an educational innovator and a strong commitment to continuous improvement and the highest standards of ethical conduct. She is a very deserving recipient of this award.”

A native of Gaston, Dr. Smith-Woofter has experience from the classroom to the principal’s office. She initially taught math at Northampton County High School-West before leaving to accept an administrative job just across the river in Roanoke Rapids.

From that point, the Virginia State and East Carolina University graduate began a career climb, first as assistant principal (1996) and then principal (1998-2005) at Chaloner Middle School in Roanoke Rapids. Her next stop was a two-year stint (2005-07) as principal at Roanoke Rapids High School. She then moved to the Roanoke Rapids City Schools Central Office, in charge of Student Services and Accountability.

Her next step came as the founding principal at the newly opened Roanoke Valley Early College High School, a part of Weldon City Schools. In October of 2012, she moved to the Weldon City Schools Central Office, charged with heading up Curriculum and Accountability. From there she was promoted to Chief Academic Officer, a position she was holding until being named as the new leader of Northampton Schools in June of 2014.