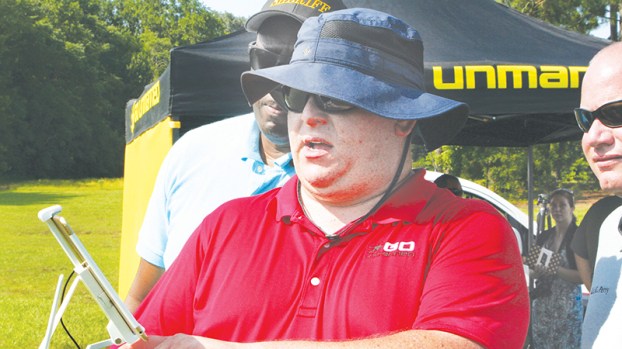 Eyes in the Sky

On a cold Christmas Eve night, the man found himself stuck up to his waist in the mud of a swampy area surrounded by deep and frigid creeks in Cumberland County, when a small flying object passed over his head.

The object was a Fayetteville Police drone. It may have saved his life.

“The subject crossed at least two sections of creek that were over his head. The temperature that night was 40 degrees and the suspect became lodged in the mire. The incident quickly became a rescue mission with the use of the drone to safely guide the officers to the suspect’s location.”

Fayetteville police publicly unveiled their year-old drone program on April 10, touting its early successes, including the Dec. 2017 rescue as one of their small unmanned aircraft systems (sUAS) program’s successes.

“Due to the frigid temperatures at the time and … that the suspect was stuck in silt, it is highly probable the suspect would have succumbed to hypothermia without the aid of the aviation unit,” a Fayetteville Police Department statement said.

A growing number of law enforcement agencies in North Carolina have initiated drone programs since 2016, when recent changes in both costs and regulations made the unmanned systems practical for local agencies.

The promise of drones, like any tool, comes with concerns about their potential abuse. Observers wonder about erosion of protections against unlawful searches. Courts and lawmakers haven’t yet set precedents or passed legislation to address all of the potential questions raised by the rapidly developing technology.

Law enforcement agencies are keenly aware of these concerns. But as CPP talked with agencies across the state, their answers to drone use varied widely.

While Fayetteville emphasized the potential for drones in rescue situations and said the department will not use them for “vehicle pursuits, to assist in issuing traffic citations (or) for routine patrols,” the December incident was also described as an effort to located a wanted suspect.

This article takes a look at the rapid adoption of drones by the law enforcement and the legal and practical implications.

Jeff Welty of the University of North Carolina School of Government writes a blog about North Carolina criminal law in which he has twice discussed law enforcement drones. The situation he described in an April 2015 entry was dramatically different from what he had to say in August 2017, because of dramatic changes in the law and cost of drones.

An important legal change in North Carolina took place on Dec. 1, 2015, due to the lapse of a requirement for pre-approval from the state’s chief information officer before a local jurisdiction could use drones. This provision had essentially acted as a moratorium on drones for several years.

“Agencies felt there were too many hurdles,” Welty told CPP. “Their use wasn’t worth the headache.”

With the elimination of the state pre-approval requirement, state and federal aviation permitting processes remained, but did not pose a serious roadblock to any agency willing to ensure that its drone program was operating with proper training and precautions in place.

“Although a law enforcement agency may now send an officer to the local Best Buy to purchase a drone, before a government employee may launch the drone, he or she must pass a ‘knowledge test for operating an unmanned aircraft system’ devised by the Division of Aviation of the Department of Transportation, G.S. 63-95,” Welty wrote on his blog last year.

“At the federal level, the FAA also requires than an operator have a certificate of authorization or a so-called “Part 107 remote pilot certificate,” he added.

But just having authorization to fly a drone doesn’t give law enforcement agencies a black check for how they use them.

“G.S. 15A-300.1 places certain limits on law enforcement use of drones for surveillance purposes,” Welty wrote. “In a nutshell, drone surveillance is prohibited without a warrant or exigent circumstances, unless the drone is surveilling an area in an officer’s plain view. If anyone has had a case involving a drone warrant, I would be interested to hear about it.”

Both on his blog entries and in talking with CPP, Welty indicated that some problems we can imagine just haven’t been addressed by any laws or by the courts yet, including the legal limits of an officer’s “plain view.”

The some constitutional questions can be guessed at based on non-drone surveillance case law, Welty said. For instance, using zoom lenses for plain-sight surveillance is probably OK, he said. But using infrared vision for surveillance without a warrant is probably not OK, according to Welty.

While the legal change encouraged drone use in North Carolina, the commercial availability of modestly priced drones has been a game-changer nationally, according to Dan Gettinger, who runs the Center for the Study of the Drone at Bard College in New York. He points to records showing the vast number of police drone programs have gone up since 2015, coinciding with the commercial availability of the DJI Phantom. Most of the law enforcement drone programs in existence have gone live in just the last year, he said.

Currently, the DJI Phantom 4 can be purchased off the shelf for about $1,500, though additional equipment may increase the cost.

Gettinger said most law enforcement agencies seem to be well-aware of the constitutional concerns about drone surveillance and public worries about potential abuse. 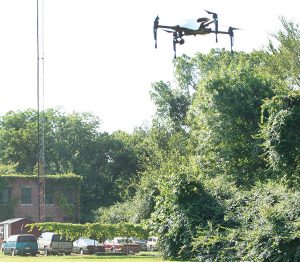 The Unmanned Aerial Vehicle, or drone, takes off from the Bertie County Sheriff’s Office parking lot for a demonstration flight.

“The are only talking about (surveillance) to deny that they will ever use it for that,” Gettinger said.

There’s also been no talk of arming drones for police use so far in the United States, but Gettinger noted that it’s already happening elsewhere, such as in countries that use drones to drop tear gas for crowd control.

He also noted the parallel case of ground-base robots, which are legally very similar to aerial drones. In a recent mass shooting incident in Austin, Texas, an unmanned ground robot successfully used lethal force to take out the shooter. Could an agency concerned about terrorism do something similar with a drone eventually?

Even those it’s a national issue, Gettinger said the issue isn’t getting much congressional attention so far. “Legally, the action is happening on the state level,” he said.

Gettinger’s organization tracks drone programs across the country. He’s aware of at least 13 agencies with drones across the state, though several of them are firefighting or rescue agencies, rather than law enforcement.

CPP interviewed several of these agencies about their drone use and found a substantial range of thought about their appropriate uses and limitations.

With county commissioners initially uncertain about whether costs were justified, he wants to demonstrate the many uses drones. He’s hoping to get an infrared device added in the upcoming budget to extend those uses further. Infrared is crucial for nighttime video and can also be used to identify heat sources.

Like other agencies, Bertie’s drone has been used for search-and-rescue operations. It’s also been featured at community events.

“We go out and show the kids all our toys,” Perry said.

But other uses of the Bertie drone program have been more exceptional.

Perry described using the drones to fly over rivers to monitor flooding or to identify the source of an oil spill. They’ve also used the drone to inspect a county radio tower.

In one case, Bertie County used its drone to assist neighboring Halifax County in checking an area that was hard to reach from the ground for a suspect marijuana cultivation operation. It turned out that no drugs were being grown on the site, Perry said.

Although no one has been caught, he hopes that drone use near a prison in Bertie will help put an end to a rash of incidents in which someone throws contraband over the fence and the flees on foot into the woods.

As for other types of surveillance, Bertie County has not done that, Perry said: “It hasn’t come up yet.”

In Fayetteville, Police Chief Hawkins described a growing range of applications for the city’s drone program.

“One system is designed to be portable and used for (rapid-reaction) operations, where it can be deployed by a pilot … on-scene in under two minutes,” she said. “The other system is used for special investigations, search-and-rescue and large scale events. It can be deployed in under 5 minutes.”

Hawkins emphasized the high efficiency and cost-effectiveness of the drones in extending the eyes and ears of her agency, which has a 10-person unit operating the two drones.

“One pilot … and observer can search an area with the drone quicker than 20 officers on foot,” she said. “If you were to research an entry-level police helicopter program you would find the cost to be approximately $1.3 million, while the cost of the Fayetteville Police Department’s (drone) program was under $100,000, and it was funded by drug-forfeiture monies. Obviously the cost savings is significant and allows the department to provide additional tools for investigations, criminal apprehensions and rescues that otherwise would not be available.”

One agency using drones statewide is the State Highway Patrol. But First Sgt. Mike Baker told CPP that this use, which began in September 2017, is quite limited.

“The State Highway Patrol does have a drone program, currently utilized by the Patrol’s Collision Reconstruction Unit,” Baker said. “We have identified the use of drones affords the unit the ability to map collision scenes with greater ease, while having a positive direct result on traffic congestion and the amount of time a roadway has to be closed for mapping purposes.”

But asked about whether drones were used to look for speeders or erratic drivers, Baker’s response was emphatic. “We do not use drones for any sort of enforcement action or monitoring the public (or) motorists,” he said.

Frank Taylor is the managing editor of Carolina Public Press. Contact him at ftaylor@carolinapublicpress.org. Permission was received to publish this story.